Germany’s Social Democrats are seeking to sharpen their profile at a party conference. Chairman Sigmar Gabriel wants to convince delgates he's not selling out in coalition talks with Chancellor Angela Merkel. 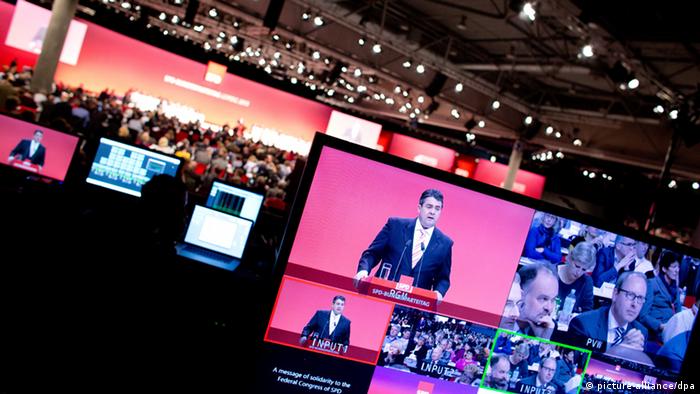 The SPD chairman, Sigmar Gabriel, who is to stand for reelection on Thursday afternoon, used a speech to stress that he would stand firm on pivotal election platform issues, such as the introduction of a legally binding minimum wage.

"We will not go for any foul compromise," he vowed.

"Maintaining the unity of our party is in the end more important than being in government," he added.

The election on September 22 left the CDU/CSU bloc five seats short of an absolute majority. After initial hesitation, the SPD, again the second-largest party in parliament, entered talks to establish what is termed a "grand coalition", which would hold an 80 percent majority in parliament, the Bundestag.

The 600 delegates at the party conference began their meeting in Leipzig with resounding applause as a show of support for their luckless candidate Peer Steinbrück, who took full responsibility for the party's poor election result of only 25.7 percent - the second worst in history.

But he also called on the party not to sell out on their beliefs.

"Democracy is based on the ability to compromise - but this can not be reached at all cost," he said, appealing to the SPD negotiators to stand firm during the coalition negotiations.

In their bid to regroup and redefine their positions the party leaders have decided to consider future cooperation with the Left party.

Theoretically it would still be possible for the SPD to join forces with the Greens and the Left party to form a government, but such an alliance has been ruled out categorically ahead of the election.

The Left party is made up of successors to former East Germany's communists, West German radical anti-capitalists and Social Democrat renegades. Now the SPD is set to consider dropping this taboo and consider rapprochement with the Left, with whom they largely agree on issues like minimum wage and tax hikes on the rich.

The SPD's 472 000 members - the party is not only the oldest, but also the largest in Germany's political landscape - will be asked to vote on a final coalition agreement.

Party leaders fear a rejection, as many Social Democrats blame the previous grand coalition under Angela Merkel (2005-2009) for their drop in support.

The party's negotiators are hoping to get the support they need and have listed 10 demands as “non-negotiable” in coalition talks. These include not only the minimum hourly wage of 8.50 euros ($11.40), but also equal pay for men and women, more investment in infrastructure and education and a common strategy to boost euro zone growth.

To implement all the plans from the two camps, Germany's federal government would need an estimated 50 billion euros per year.

Chancellor Merkel has said the proposals need to be reworked and she hopes to have a government sworn in by Christmas.