A priest who wants to teach children about persecution may be facing prosecution if the Playmobil company has its way. 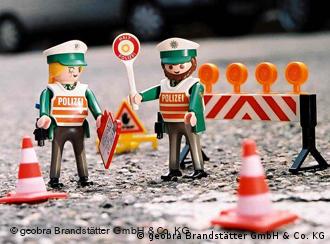 Is this a case for the Playmobil police?

A German priest who transforms Playmobil figures into biblical characters - such as Adam and Eve and Jesus on the cross - has found himself facing legal action from the company that makes the toys.

Using a candle, Father Markus Bomhard partially melted down the tiny figures to create biblical scenes, which he then posted on his website "Playmo-bibel.de"

The website's homepage features Adam and Eve holding an apple. No snap-on Playmobil clothes are in evidence.

Even Pope Benedict XVI has reportedly praised Bomhard's work, writing to the priest: "May your project allow many children and adults access to Holy Scripture."

But Playmobil's creators are not so enthusiastic. They've threatened to take Bomhard to court for copyright violation.

"For private purposes - by collectors and fans - we are very tolerant of this so-called 'customising'," the German company said in a statement released late Tuesday.

"We cannot accept such transformations for safety reasons, as our products are made from plastic and are flammable," Playmobil added.

Playmobil has given the priest until April 6 to take down his website or face the wrath of the firms' lawyers.