On Sunday evening, Chancellor Angela Merkel hopes to reach agreement with rebellious Bavaria conservatives over migrant policy. But Social Democrats have also chimed in with a wish list of their own on the issue. 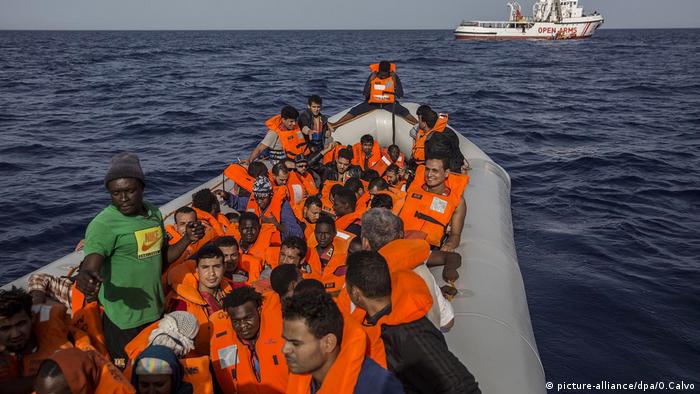 Angela Merkel's conservative CDU and its Bavarian sister party the CSU meet separately early on Sunday evening to discuss the agreements on migration she hammered out with EU partners late last week. If all goes well for the chancellor, it could mean the end of the impasse between the two conservative parties that threatened to bring down her government.

Amidst all the internecine fighting among conservatives, it has been easy to forget that there is also a third party involved: the Social Democrats. So the SPD took advantage of a rare gap in the headlines about the CDU-CSU quarrel to leak a five-point plan spelling out what it wants to see happen on the migrant issue. That document calls for

- more to be done to combat the reasons why people flee their home countries
- no unilateral action to turn people away at national borders within the EU
- more help for Italy and Greece, the two EU countries where migrants crossing the Mediterranean most frequently end up
- tighter controls of the EU's external borders
- a comprehensive German law governing immigration to the country and the German job market

The second point in particular can be read as a warning shot across the bow of the CSU, whose leaders have proposed Germany take unilateral action to turn away migrants if those people have been registered in another EU country. "Spiegel" magazine quotes that Social Democratic plan as saying the party wants a "Europe-wide solution" and a "European asylum system and fairly shared distribution of responsibilities in accepting and providing for refugees."

The party executive is expected to approve the plan on Monday, by which point most observers think the worst of the conservative in-fighting on the issue could be over. But if this governmental crisis has taught the public anything, it's that nothing is certain when the emotionally-charged issue of migrants is on the line. 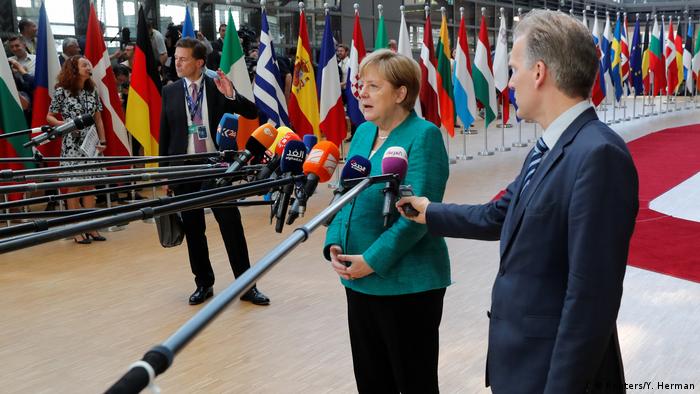 In general, Merkel is being hailed for exceeding expectations in Brussels

Merkel met with the chairman of the CSU, Interior Minister Horst Seehofer, for two hours on Saturday evening. No details emerged, but the expectation is that the CSU will support Merkel after its executive committee convenes on Sunday.

Bavarian state premier Markus Söder, nearly as influential within the CSU as Seehofer himself, has greeted the results from Merkel's Brussels meeting, saying they pointed in the "right direction."

Merkel's main worries are reports that potential partners are perhaps not quite as on board as some in media have portrayed. Leaders of five countries considered possible locations of refugee camps outside the EU – Egypt, Albania, Morocco, Tunisia and Algeria – have said they are not interested in any such deal with the EU.

EU member states the Czech Republic, Hungary and Poland have also denied that they had reached agreements with Merkel and the EU Council while meeting in Brussels to speed up the process of accepting refugees back from Germany. That drew critical words from CSU regional leader Alexander Dobrindt.

"In view of the divergent statements from several EU members, it seems doubtful whether all the decisions of the EU council will be implemented," Dobrindt told the Bild am Sonntag newspaper. It's an open secret that Dobrindt, who earlier this year called for a "conservative revolution," would like to drive Merkel from office. But the political winds now seem to be blowing against him.

CSU Vice-Chairman Manfred Weber has proclaimed that Merkel "delivered" at the Brussels meeting, while Bavaria Vice-State Premier Ilse Aigner has said that "There can be no further escalations."

The CSU challenges to Merkel's position have widely been seen as a tactical shift to the right ahead of Bavaria's regional election this October, in which the conservatives are seeking to fend off the far-right populist Alternative for Germany (AfD) party and retain their absolute majority. But polls in Bavaria suggest that the CSU has not benefited from that hardline course and may have in fact lost some support because of it.

That's not the only good news for Merkel coming from public opinion surveys. Two out of the last three national polls concerning support for political parties show the conservatives on the rise slightly. What's more, Merkel is ranked as the second most trusted politician in Germany, attracting 47 percent support compared to 32 percent for Seehofer, 24 percent for Söder and only 17 percent for Dobrindt. The CDU president of the Bundestag, Wolfgang Schäuble, is Germany's most popular politician.

Those numbers would likely further improve with a positive outcome from Sunday's CDU and CSU meetings. Should Merkel succeed in defusing the migrant policy crisis and reuniting the conservative bloc, she would partly restore her aura of invulnerability and show that, to paraphrase Mark Twain, reports of her political demise were greatly exaggerated.