Joachim Gauck was in a sailing boat off Germany's Baltic Sea coast when it overturned. The 79-year-old earned the nickname Stasi Hunter for his work investigating the crimes of the communist-era secret police. 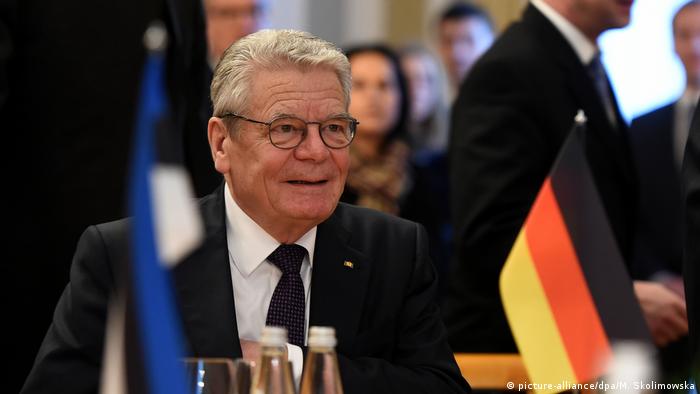 Former German President Joachim Gauck had to be rescued on Friday after his sailing boat capsized in shallow waters.

The Federal Criminal Police (BKA) said the historic cutter overturned in calm waters near the Baltic Sea town of Wustrow, about 40 kilometers (25 miles) northeast of Rostock.

The politician and civil rights activist was alone on the boat when the incident happened, BKA added.

Regional newspaper, the Ostseezeitung reported that emergency services were alerted at around 2:20 p.m. local time (1230 UTC) on Friday.

According to rescuers, Gauck's boat capsized near a patch of reeds on the water just 90 centimeters (35 inches) deep. There had been strong gusts of wind at the time.

The former head of state's spokeswoman told local media the 79-year-old was "unhurt and well."

Gauck was formerly a patron of the organization that came to his aid, the German Maritime Search and Rescue Service (DGzRS).

"Now the former federal president was able to experience in person our readiness for action," the service said in a statement.

Gauck's security detail was nearby on land, the BKA said.

The former Lutheran pastor held the mostly ceremonial role of German president from 2012 to 2017.

After German reunification, he spent a decade as head of Federal Commissioner for the Stasi Records, investigating the former East Germany's much-feared state security service.

Gauck became known as a "Stasi hunter" who helped expose the crimes of the communist-era secret police.

He was born in nearby Rostock but spent much of his childhood in Wustrow.

An East German refugee had applied for compensation after being traumatized during a hair-raising escape. He was trapped on a barbed wire fence when border guards found him. (24.07.2019)

Two cargo ships collided in the Baltic Sea off the coast of the Swedish city of Ystad and the Danish island Bornholm. One vessel capsized, with a crew member found dead and the other missing. Police have made 2 arrests.

Local police say a large waterspout made landfall in the Baltic Sea city damaging property and throwing several people into the water. Emergency and rescue services are on the scene.

Chancellor Olaf Scholz said the government will take a 30% stake in energy firm Uniper. The wholesale gas importer faces huge losses due to soaring energy prices and a threat by Russia to cut gas supplies.