The AfD has changed its press registration form for the party's congress in Hanover following a controversial attempt to access "special data" from journalists — including information on political views and ethnicity.

The far-right Alternative for Germany (AfD) party, backed down on Saturday from its bid for data on journalists' religious beliefs and political views after initially making it a requirement for accessing their upcoming national party conference.

Journalists registering online to cover the AfD's national congress in December were previously asked to check a "declaration of consent" box where they agree to the "collection, storage and use" of personal information.

Read more: The far-right AfD in the Bundestag — What you need to know

In addition to the basic requirements like name and press pass number, journalists were also required to agree to the collection of "special data."

The AfD noted "political views" as an example in their text, although they did not ask for that information in the online registration form. The party stated the data "will only be used for the purposes of the party's work."

The area was marked as required in order to complete registration for the event, meaning no journalist could sign up without agreeing to allow the AfD to collect the information. 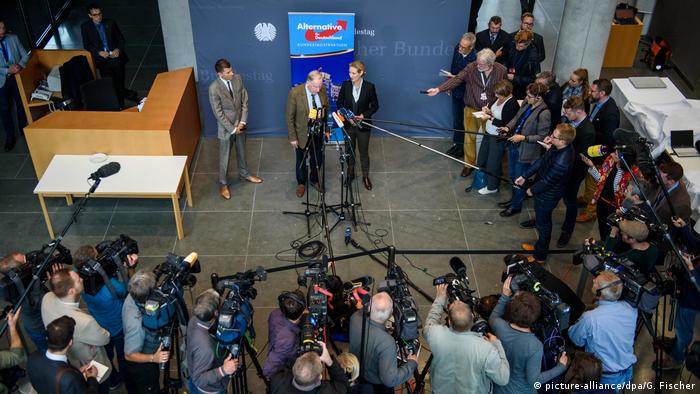 According to the Stuttgarter Zeitung, Berlin's data protection officer was looking into the matter.

If the AfD intended to gather additional personal data from journalists that was not specifically outlined in the original online form, it would be improper for the party to make access to the party conference dependent on agreeing to the terms, a data protection office spokeswoman told the paper.

Officials believed the AfD's "declaration of consent" text resulted from a mix-up rather than an intentional attempt to collect information on journalists. The same passage is frequently used in applications for political party membership, where it is acceptable to ask the political opinions of the applicant, the Stuttgarter Zeitung reported.

Whether a mistake or not, the German Journalists Association did not take the AfD's press accreditation requirement lightly.

"This is an unacceptable intrusion into the private affairs of journalists," Hendrik Zörner, spokesman for the German Journalists Association, told the newspaper.

The AfD won 12.6 percent of the vote during Germany's general election on September 24, making it the third-largest party in the Bundestag and the first far-right group to enter parliament in over half a century.

The AfD will hold its national party conference on December 2 in the city of Hanover.