The populist AfD party has said the press will not be allowed to attend an upcoming regional convention due to security concerns. Journalists have fired back that the party is encroaching on fundamental rights. 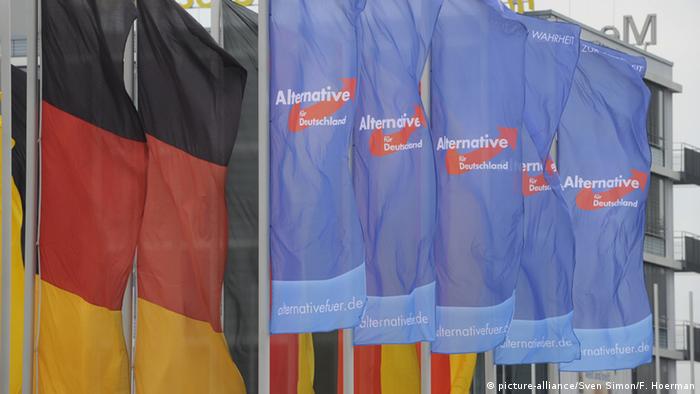 Journalists were outraged on Thursday at a call by the right-wing Alternative for Germany (AfD) party to ban the press from their upcoming regional convention in the state of North Rhine-Westphalia.

In an open letter to Renate Zillessen, the spokeswoman for the AfD in the state, the head of the regional press society LPK-NRW, Tobias Blasius, wrote that his organization was "confounded to discover" the prohibition of journalists from such a political event.

"As a union of more than 120 regional political correspondents, we would please request that you rethink what is in our opinion a severe encroachment on the freedom of the press," read the letter.

AfD: We have to 'protect' our delegates

The populists wrote on the website of their North Rhine-Westphalian branch that the decision was the result of weighing "the not easy trade-off between the legitimate interests of the media in unrestricted access to party goings-on and the equally legitimate interests of our delegates, members, and supporters in protecting their personal rights."

Animosity between the party and the press has grown over the past year, with the AfD accusing journalists of bias and the press focusing on the party's stance against immigration. According to the AfD, at their last federal party conference in Stuttgart at the end of April, political opponents applied for press accreditation in order to harass party members.

The AfD has repeatedly found itself the target of far-left violence, so much so that it often opts to keep the location of some party meetings and members' offices a secret.

The party has said it will invite journalists to two one-hour press conferences later in the week to discuss the regional conference scheduled for July 2 and 3.

The LPK-NRW was not convinced: "Full freedom of journalistic movement, the unhindered access to party documents and an unfiltered view of the discussion process are the basis of [political] reporting," wrote Tobias Blasius, before appealing to the AfD to roll back the ban.

Founded in 2013 as a Euroskeptic, financially neoliberal protest party, the AfD has grown rapidly in the past year after ousting its founder and adopting a more anti-immigration, nationalist stance. No stranger to domestic controversy, at its April convention it voted to adopt an official stance against Islam as "having no place in Germany" as part of its manifesto.

A new poll has found that the vast majority of Germans are for remaining in the EU. When it comes to the country's major parties, only AfD's supporters would back a "Brexit"-style departure. (22.06.2016)