Two days before the new Bundestag convenes, protesters called on the German government not to tolerate right-wing hatred. The message was clearly directed at the far-right Alternative for Germany party. 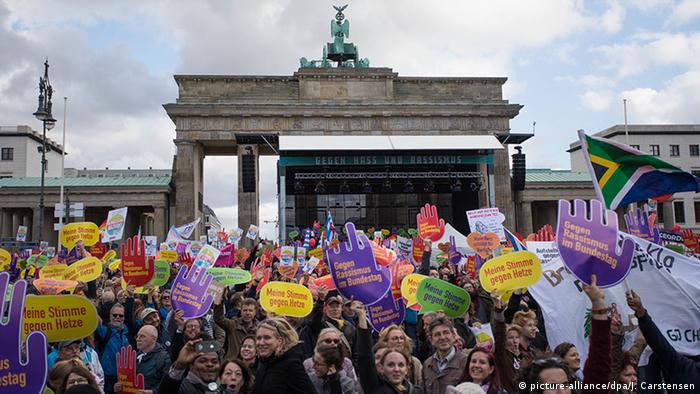 On Tuesday, a far-right party will enter Germany's parliament for the first time in nearly six decades. In an attempt to set the tone before the Alternative for Germany party (AfD) takes its seats in the Bundestag, at least 10,000 demonstrators turned out in front of Berlin's Brandenburg Gate on Sunday, holding signs reading "My Heart Beats for Diversity," "No AfD" and — playing on calls to cap the numbers of refugees allowed into the country — "Upper Limits on Nazis."

The official title of the event, "Against Racism and Hate in the Bundestag," didn't explicitly mention the far-right party, which took 12.6 percent of the vote in national elections on September 24. But initiator Ali Can made clear who the intended recipient of the demonstration's message was when he addressed the crowd.

"I've read the constitution and am somewhat shocked at some of the things politicians, especially the AfD, come out with," Can said. "Have they even read Article 3? It explicitly states that no one shall be discriminated against or treated favorably because of where he comes from."

The AfD swept into the Bundestag on a platform focused on hostility to refugees, the assertion that Germany is being "Islamified," and the idea that migrants are a threat to law and order.

Can called for greater mutual respect in society and for politicians to lead the way, arguing that tolerance is in everyone's interest.

"Even AfD politicians can be the victims of prejudice," Can told DW. "We're coming out here against racism and hatred in general, no matter where it comes from and at whom it's directed."

Can knows of what he speaks. The 23-year-old himself was once a refugee.

Can, whose Turkish-Kurdish family fled southeastern Turkey for Germany when he was only 2 years old, is somewhat unusual among multicultural activists. For one, he seeks dialogue with the people he opposes.

Last year, for example, Can set up a "hotline for concerned citizens" who claimed to be worried about the negative effects that they believed migrants had had on Germany. Presenting himself as a "migrant you can trust," Can posted his phone number on the internet — an act of considerable courage during an age in which hate speech and trolling have become so common — and encouraged AfD voters and supporters of the anti-immigration PEGIDA movement to call him with their questions.

Can is an unapologetic idealist who knows how to mobilize people and attract publicity to his cause. Sunday's demonstration was organized at a furious pace after the election and was supported by more than a dozen prominent activist groups.

The turnout won't likely do anything to change the minds of the Bundestag's AfD deputies. Those with more political experience than Can point out that more than noble sentiments will be needed to impose limits on the AfD's legislators.

"If you look at the list of the parliamentarians who will be joining the Bundestag, there are unfortunately a whole series of them who've attracted attention in the past with right-wing extremist or racist statements," Anton Hofreiter, the joint parliamentary leader of the Greens, told DW. "It's important to combat them with clear, rigorous opposition." 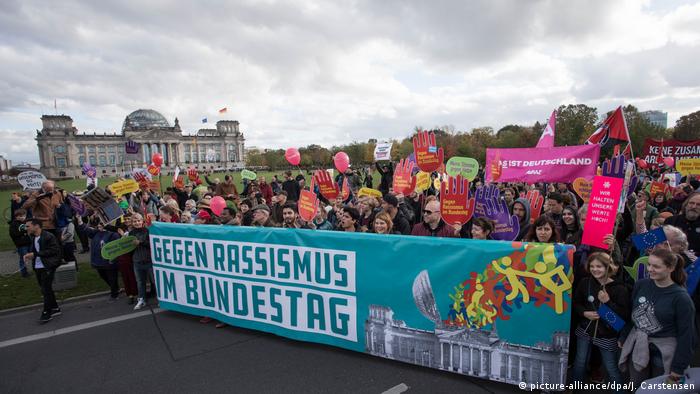 Political realism did not deter Hofreiter from joining the ranks of the demonstrators who marched from the Brandenburg Gate to the Victory Column and the Reichstag, and then back to the Brandenburg Gate for a concert featuring the Berlin hip-hop and reggae band Culcha Candela.

"What we want to do today is to send a signal," singer Johnny Strange told DW. "Some 13 percent of voters chose the AfD in the election, but there's a large majority (who didn't), and I think they should be seen and heard."

The crowd that showed up on Sunday was an example of the diversity of German society. Some of the protesters had immigration backgrounds; others came out of a sense of duty stemming from the country's Nazi past.

"I was born in Korea, but I grew up in Germany and have lived here for 40 years," one woman said. "I want to say: 'This is my land.' I think in a democracy you have to fight for that."

"I think as a German you have a responsibility to ensure that parties like the AfD never again have the final say in German politics," a man said.

When pressed on what concrete measures they wanted German politicians to take, many of the protesters were at something of a loss. But they were clear that they do not want the Bundestag to become a forum for racist and xenophobic sentiments. And that was reason enough to take to the streets on a fine late-autumn day to vent their unease with the AfD.