Some German states are pausing vaccinations over the long Easter weekend. They blame supply and logistical issues. Federal officials are promising things will get better soon. 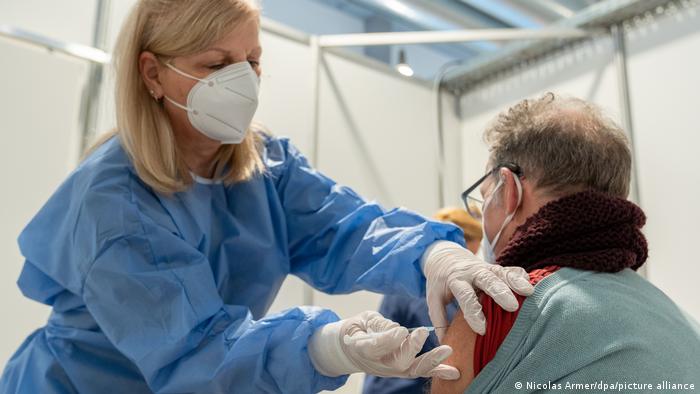 AstraZeneca has become Germany's spanner in the vaccination works. It's like playing whack-a-mole: Every time one issue has been put to bed — whether contractual, political, or scientific — a new one seems to pop up.

Germany's latest decision to use it only for people 60 and over, after first approving it for those 64 and under, is likely to further slow down the overall vaccination process.

The latest measures came due to fresh concern about potentially fatal blood clots as a side effect of the AstraZeneca vaccine: In Germany, there have been 31 such cases among the 2.7 million who have been vaccinated so far.

The abrupt cancellation of AstraZeneca appointments will delay vaccination by weeks.

The latest snag comes just days before Easter. Pandemic or not, Germany tends to shut down over the long weekend. Friday, Sunday, and Monday are public holidays. Goods deliveries and transport are banned. Shops are closed. Those who have to work are paid extra.

Some states are pausing their vaccinations, too. 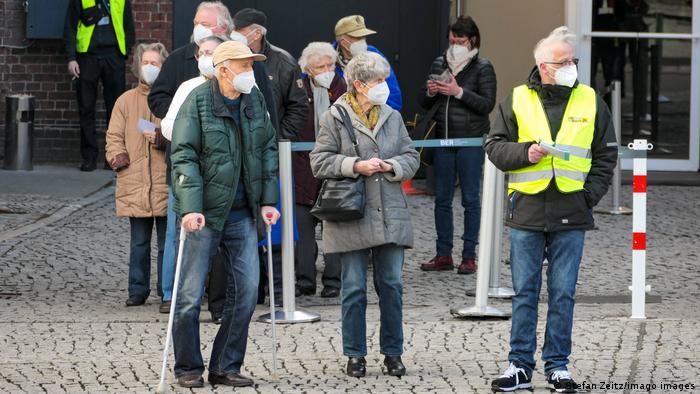 Berlin vaccinates every day, and has said it will do so through Easter

As with many aspects of the pandemic response, Germany's 16 states are in charge of vaccination. That makes it difficult to build a comprehensive picture. At least seven states expect to limit vaccinations or close centers over the holiday weekend, according to German media.

Berlin vaccinates every day, usually 9 a.m. to 7 p.m., and has said it will do so through Easter.

But other states, like the small, western state of Saarland, for example, never open vaccination centers on Sundays, when much of public life in Germany is at a standstill.

The states say there is no point offering appointments when there is no supply. Regular weekday hours are more than enough time to get through their allotted doses, they say.

Through the end of March, German states have received nearly 16 million doses of approved vaccines, according to the Federal Health Ministry (BMG), of which about 13.5 million have been administered. The leftover is due to reserving supply for second shots as well as eligible people not showing up for appointments.

Merkel: 'We have to be able to trust our vaccines'

There is conflicting information on how big the shortfall is. Vaccine suppliers, however, promised more than what has actually been delivered.

Three million doses may reach states over the next several days, Health Minister Jens Spahn reportedly told party colleagues at a meeting earlier this week. That would allow 24/7 vaccination, he said, including over the holiday.

"Jens Spahn can call for an around-the-clock vaccination campaign all he wants, but the government needs better crisis management to do that," Janosch Dahmen, a medical doctor and Greens MP, told DW. "They've had a year to organize it, now it's about results to get this pandemic under control."

Echoing many of the growing frustrations with Germany's slow progress, Dahmen called for better coordination between federal and state authorities, and more reliable delivery planning.

"Speed trumps perfection when it comes to fighting a pandemic," Dahmen said. Chancellor Angela Merkel herself recently acknowledged neither speed nor flexibility are Germany's strong suits. 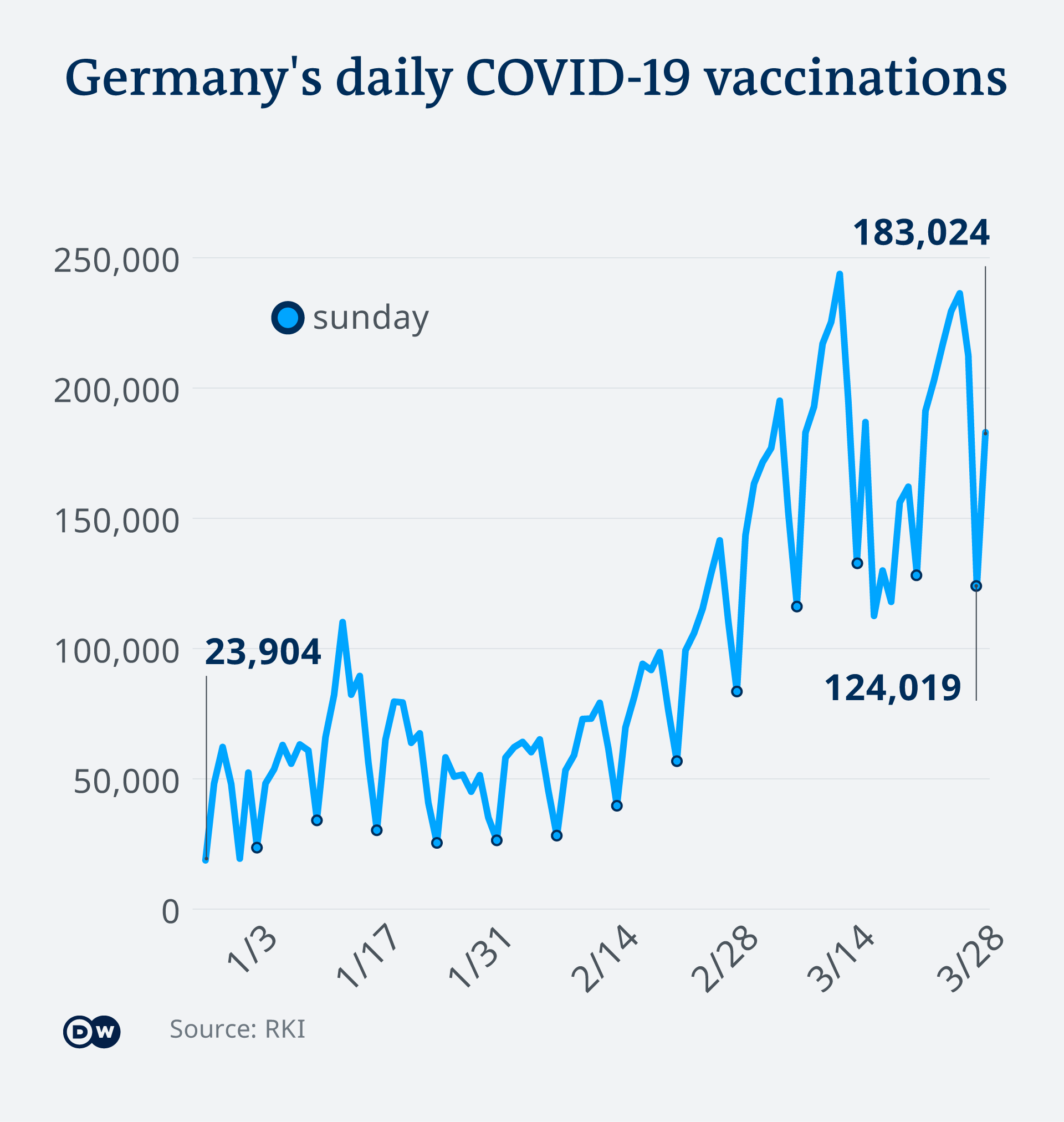 Just about 11% of people in Germany have received at least one shot — that's the European Union average. Other big EU members, like Spain and Italy, are ahead, while France is catching up.

Around the clock vaccination is uncommon, even among world leaders in COVID vaccinations, such as the United States, the United Kingdom, and Israel. Those countries also experience weekend dips like in Germany.

But they made quicker vaccine deals, enjoy greater supply, and export less, if at all, than Germany, which deferred to the EU on those decisions. So their weekend vaccination dips are still higher than Germany's weekday peaks.

Another difference: Other countries got the vaccine out to more places than Germany has so far. Despite a federal system that favors decentralization, vaccinations have been highly centralized.

Late last year, with vaccine approvals pending, states were instructed to establish large centers that could go through thousands of people per day. Berlin made six across the city, which officials initially estimated could administer 20,000 shots daily. Yet after 11 weeks, the city was still not through its 80-plus group — about 200,000 people, or less than 6% of the population.

Starting in April, thousands of private medical practices are now to join the effort. But doctors there can expect just 20 doses per week to start with, according to the National Association of Statutory Health Insurance Physicians (KBV), which represents general practitioners. That may increase to 100 per practice per week by month's end.

The delay in getting doctors onboard has been partly due to doubts about whether they would stick to the prioritization rules rather than vaccinating friends and neighbors.

Stahl rejected those concerns, stressing that people trust their neighborhood practices making them best able to reach priority groups, and move down the list from there.

"Without the practices, the population cannot get quickly vaccinated," Stahl said.

The BMG expects deliveries of more than 15 million doses in the next month, split between centers and practices. So it will still be weeks until there is a noticeable pickup in vaccinations.

The AstraZeneca vaccine was praised for its cost-effectiveness and its easy-to-store advantages. But recent cases of blood clots linked to the vaccine have led to doubts about its safety.