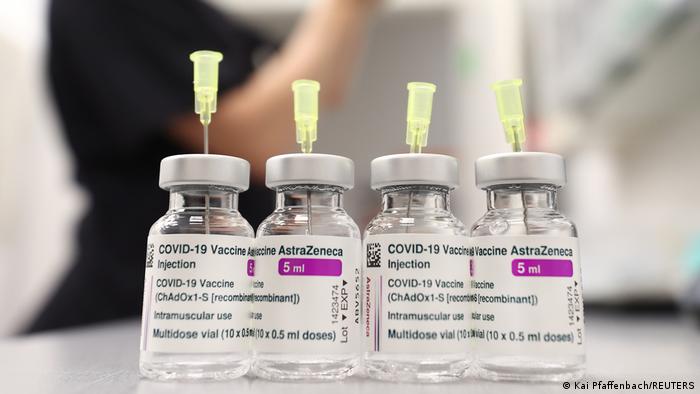 German Health Minister Jens Spahn and the 16 state health ministers on Tuesday decided to suspend the routine use of the AstraZeneca vaccine for people under age 60 at an emergency meeting.

Authorities in the cities of Berlin and Munich had earlier decided to limit the use of the vaccine.

People under 60 can still receive the shot, but only "at the discretion of doctors, and after individual risk analysis and thorough explanation," according to a document seen by the DPA news agency.

Why was the decision made?

The decision came amid fresh concern over unusual blood clots reported in a tiny number of younger people who received the vaccine.

"The positive message is that the vaccine from AstraZeneca should continue to be vaccinated for people who have reached the age of 60," said the chairman of the health ministers' conference, Bavaria's Health Minister Klaus Holetschek.

"The studies continue to show that this is a vaccine that is effective against severe bouts of the disease. We need it to be effective in the face of the third wave and dangerous viral mutations, we need it to move forward quickly," Holetschek said.

Germany's permanent vaccine commission, known by the short name STIKO, earlier on Tuesday published new guidelines recommending that the AstraZeneca vaccine be issued only to those over 60.

It said it had made the decision "on the basis of currently available data on the occurrence of rare, but very serious thrombosis-related side-effects." The commission said that it would issue guidelines on what to do for adults under 60 who had received a first AstraZeneca shot and were due another by the end of April.

Acting on the STIKO advice, authorities in Berlin and Munich earlier temporarily halted AstraZeneca vaccine usage on people under the age of 60.

How did German leaders respond?

German Chancellor Angela Merkel defended the new age limitations. "Trust comes from the knowledge that every suspicion, every single case will be looked into," she said after a consultation with Germany's state premiers.

She added that she would also be willing to receive the AstraZeneca vaccine "when it is my turn." The chancellor is 66 years old.

"At some point with AstraZeneca specifically we might have to operate with a lot of freedom: whoever wants to and whoever dares to, so to speak, should have the opportunity," Söder said. "With AstraZeneca it seems some new problem or other should be expected daily. And honestly you sense that in the broader public perception as well."

What had the city of Berlin decided?

Kalayci said she wanted to wait for the next set of recommendations from regulators following reports of side effects from the vaccine.

Earlier, Berlin's state hospitals stopped vaccinating women under 55 years of age with AstraZeneca's jab, amid reports of rare but serious side effects.

In some cases, patients who received the AstraZeneca vaccine later went on to develop an unusual form of blood clot in the head. Of the few cases recorded, younger women have been primarily affected.

Several European countries briefly suspended use of the vaccine earlier this month, albeit in that instance for more elderly people rather than the young, but resumed jabs after EU regulators said the shot was safe for use.

What did the hospitals say?

The Charite and Vivantes hospital groups, which operate hospital networks in the German capital, said the move was a precautionary measure.

"From the Charite's point of view, this step is necessary because in the meantime further cerebral venous thromboses have become known in women in Germany," a spokeswoman said in a statement sent to several German media outlets.

In an interview with DW, Tobias Kurth, epidemiologist at Charite Hospital explained their decision to suspend using the AstraZeneca coronavirus vaccination for people under the age of 60.

After the hospital's board of directors and other medical professionals reviewed new data around AstraZeneca' potential side effects, they decided to halt vaccinations as "a precaution to not put people unnecessarily at risk," Kurth said.

However, a final decision on the use of AstraZeneca will have to "wait until the agencies have officially looked at the data and have made their recommendations," he said.

When asked if news of the suspension of use should be alarming, Kurth said that the side effect was "very, very rare, but it is there...more likely than we would normally observe."

However, Kurth said, "the benefits still outweigh the risks of the drug."

Going forward, he continued,  "it is now very important that we find a solution for this, that we have enough vaccines available, and continue to vaccinate people."

As of March 18, Germany had so far given out the most AstraZeneca vaccine doses in Europe

What is Germany's stance on AstraZeneca?

Like many other European countries, Germany also briefly halted use of the AstraZeneca vaccine pending a review by the European Medicines Agency (EMA).

On March 18, the EMA approved the jab again, saying it was "safe and effective" after reviewing data on the blood clot cases so far.

A day later, Germany resumed vaccinations with AstraZeneca. The vaccine, however, now comes with new advice on potential side effects.

Germany's medical regulator, the Paul Ehrlich Institute, has said that 31 cases of cerebral venous thrombosis have have been reported so far following jabs with the Astrazeneca vaccine, news magazine Der Spiegel reported. Nine people have died.

A previous version of this article stated the use of vaccines had been suspended for women under 60, rather than everyone under 60. This has now been corrected. The department apologizes for the error.