Germany′s colonial era brought to light amid global protest | Germany | News and in-depth reporting from Berlin and beyond | DW | 22.06.2020 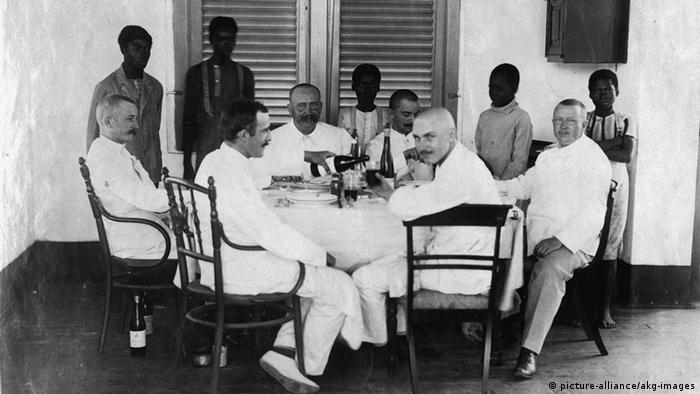 A statue of the English merchant and slave trader Edward Colston was toppled and pushed into the river in his hometown of Bristol; a statue of Christopher Columbus in Boston was beheaded. Authorities in Belgium's port city of Antwerp removed a statue of former King Leopold II, clearly fearing that it, too, might be torn down. After all, Leopold was notorious for the unbelievable cruelty perpetrated in his own "private colony."

Across the world, symbols of colonialism and racism are being questioned and, in many cases, torn down. This after decades, even centuries, where these pointers to a terrible past had often been glorified even as many historians and activists called for a rethink of colonial legacies. But now, following a white police officer's killing of black American civilian George Floyd, the times have clearly changed. Many people who long ignored the brutal history of colonialism and its racist legacy have now become interested in the past.

By comparison with other European colonial powers, Germany's colonial history was relatively short. Though some German states and several private companies had long mounted colonial projects abroad, officially Germany's colonial empire only began in 1884. Indeed, one of the key events of global and colonial history took place on German soil at the invitation of the country's first chancellor, Otto von Bismarck— the Berlin Conference of 1884-5, where representatives from 14 countries and empires met to formally partition colonial Africa. 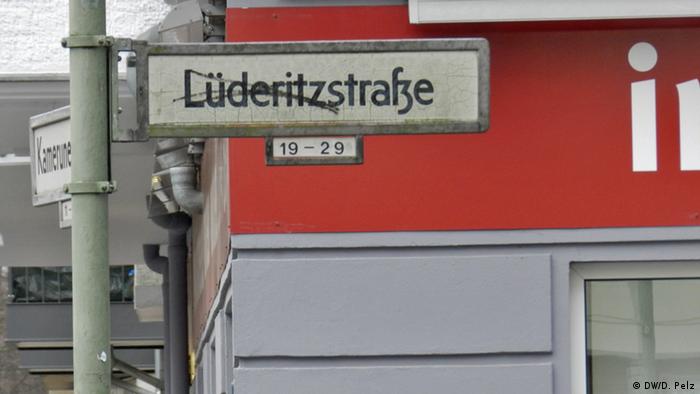 The battle about renaming streets in Berlin's African quarter continues

Streets and squares throughout Germany are still named after colonial-era leaders including Carl Peters, Adolf Lüderitz, and Gustav Nachtigal. General Paul von Lettow-Vorbeck was the commander of the German East Africa campaign; until just a few years ago, his name was given to army camps and schools. There is still a statue celebrating Hermann von Wissmann, a former governor of German East Africa, in the small town of Bad Lauterberg in central Germany as well as a bust representing Nachtigal, who served for a time as commissioner for Germany's West Africa protectorates (today's Cameroon and Togo), in the eastern city of Stendal.

How can Germany best come to terms with its colonial past? It is a question that is easier to pose than to answer. What to do with all the statues? The street names? And the looted art that is to be found in such abundance in Germany's museums? Possibly the biggest question of all is of whether Germany must officially apologize for colonial crimes such as the Herero and Nama genocide in Southwest Africa, the Maji Maji Rebellion in East Africa, and deliberate famines that together cost several hundreds of thousands of deaths. Just as important is the issue of whether Berlin should now make reparation payments to compensate for the massacres. All these unresolved topics are part of the dark shadow cast by Germany's colonial past.

One northern district of the German capital is called the "African Quarter." Many streets in the area have names related to Africa and there is a fierce and long-running debate over whether some of them should be renamed. The district assembly decided in recent years that two streets and one square should carry the names of resistance fighters who challenged Germany's colonial rule.

Read more: Europe's overseas territories — What you need to know

However, some local residents and people with businesses in the area oppose the move — and not always for political reasons but because having to change their address would come at a cost. Others say they simply want things to stay just the way they are; a question of habit. But an initiative called "For the African Quarter" has come up with a seemingly creative solution to the deadlock. It proposes that the streets should keep their present names, but rather be named for different people and places. Lüderitzstraße would, for instance, be named after the Namibian town with the same name. Nachtigalplatz would be renamed after a theologian, Johann Nachtigal. And Petersallee was already renamed back in 1986 to carry the name of Hans Peters, a resistance fighter against Nazi Germany, and no longer Carl Peters, who ruled so brutally in East Africa. For many people, however, that is a copout — and does not begin to address the widespread brutality, oppression, and killing wrought by the German colonial empire. 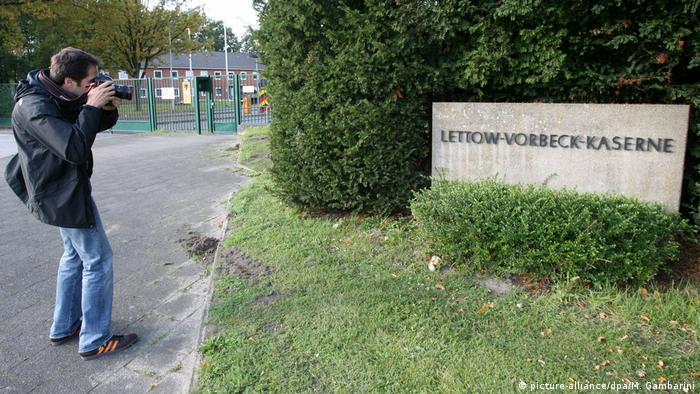 At the former Lettow-Vorbeck barracks in Hamburg, information panels have been installed with background on the busts of men like Paul von Lettow-Vorbeck and Lothar von Trotha, who played key roles in suppressing resistance and violent uprisings in the German colonies. But what exactly the future holds is unclear. The Hamburg city government wants future generations to be able to make up their own minds on how best to deal with these dark chapters in German history. The concept is opposed to both glorification and eradication and looks instead to remembrance and coming to terms with history.

The activist and awareness-raising group "Postkolonial" — active in more than 20 German cities — is taking the debate one step further. According to its website, the group is pushing for "the comprehensive decolonization of Hamburg as an urban space (…) and the visualization of the history of anti-colonial resistance as well as a respectful commemoration of the victims of colonialism and racism." That includes the renaming of streets, but the group's priority is not merely to erase all traces of colonialism. Christian Kopp, a Berlin-based spokesman for the group, says that what he calls "anti-memorials" are also welcome. He argues that it simply does not go far enough to just put up another information panel in front of another monument or another memorial.

Meanwhile, Hamburg University African studies expert and colonial historian Jürgen Zimmerer says that the issue is multifaceted. "What I'm interested in is preserving monuments as historical sources. At the same time, they have to be radically deconstructed, de-theorized, and emptied of any notion of heroism, so that they lose their function in glorifying history. We could turn them upside down, for example. Or lie them down on the ground."

One example of how history can be obscured by a blanket of silence is the grave of Lothar von Trotha in Bonn. As commander of German troops in Southwest Africa, he issued what he called an "extermination order" in 1904 leading to the horrific crushing of a Herero uprising and the starvation and killing of thousands of civilians in what became Namibia. His grave bears no mention of his murderous past.

A 'cult of guilt,' the far-right claims

Though numerous historians have called these massacres the first genocide of the 20th century, it is a position that the German government has so far refused to officially recognize. But, speaking in Windhoek earlier this month, Namibian President Hage Geingob said he believes that Germany is now finally willing to issue a formal apology. His statement, however, was met with silence in Berlin. The German government has so far dismissed any prospect of reparation payments, above all by claiming that Namibia — the country that suffered hundreds of thousands of deaths at the hands of German colonial leaders — has benefited extensively from development aid since then. 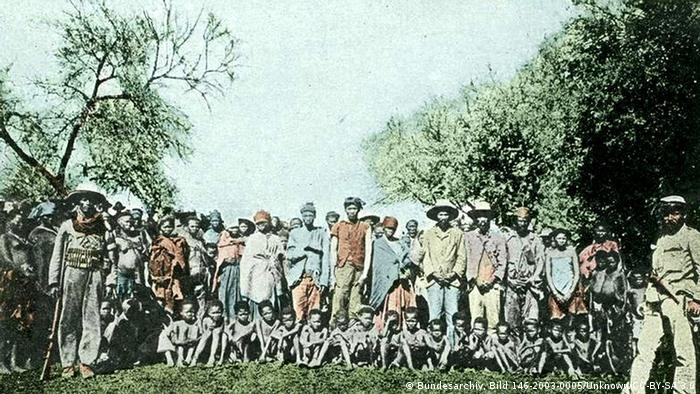 Germany's political parties share a critical approach towards their country's colonial past. With one exception: the far-right populist Alternative for Germany, the AfD. Referring to the current debate on how to confront the past and monuments to the past, the party's co-leader in parliament, Alexander Gauland, recently said: "Attempts to impose a historical narrative cleansed of any troubling aspects, were something we know thus far only from totalitarian systems." Another AfD parliamentarian, Gottfried Curio, appeared in a video recording, bemoaning what he sees as a campaign by the left to inculcate Germans with an "African cult of guilt."

Memorials 'manifest our own ideas and values'

So, is it even possible to judge historical personalities and events by today's standards? Historian Zimmerer is in no doubt whatsoever that we can: "Otherwise, we would not be able to distance ourselves from Hitler, Himmler and the rest and condemn them for what they did." He says at the heart of today's debate is the question of "whether historical personalities are suitable models, and our current standards have to apply in judging them. In memorials to the past, we manifest our own ideas and values."

Johann Hinrich Claussen, Cultural Commissioner of Germany's Evangelical Church, is among those who welcome the spirit of protest and questioning — and believe that it is high time to face up to Germany's colonial past. Claussen concedes that it is not always possible to compare the debate in Germany on how best to remember the past with the same debate in countries like the USA and UK. There can be little doubt that some people in Germany are now finally waking up to their country's colonial past. But, Claussen says, there is a long way to go.

Thousands of Ugandans have signed a petition calling for roads honoring British colonial figures to be renamed. The appeal comes amid the killing of George Floyd and the subsequent Black Lives Matter protests. (20.06.2020)

The German Museums Association has underscored the importance of non-European perspectives when dealing with artifacts taken during German colonialism. Restitution is harder than with Nazi-looted art, an expert said. (02.07.2019)

The central bank in the Netherlands admitted that early directors profited from plantations in the Caribbean and South America and advocated against the Dutch abolition of slavery.