Germany′s colonial legacy in Bougainville and South Pacific | Germany | News and in-depth reporting from Berlin and beyond | DW | 12.12.2019 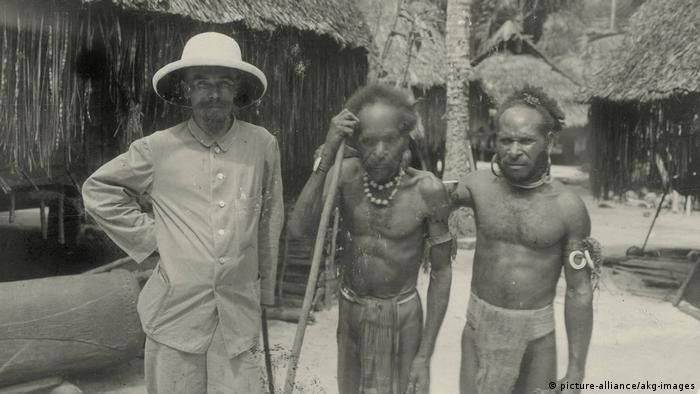 Germany had only come into existence as a unified empire in 1871. Otto von Bismarck, the man behind this unification, had an initial reluctance to expand German territory, citing expenditures, meager profits and diplomatic complications. When around 1884 he finally did decide to, his methods were rather less considered and more shortsighted than those of his European neighbors.

"Germany was a latecomer to the colonial stage, and that is possibly the main cause of the rather irrational interests in the Pacific," Mads Bomholt Nielsen, a researcher in the Department of English, Germanic and Romance Studies at Copenhagen University, told DW.

Britain in the background

Germany's colonization policies were informed in part by its relationship to other European powers. Britain, a major global empire with a significant presence in the South Pacific, played a role in Germany's interest in that area.

"The Germans chose to colonize the South Pacific, much like the Cameroons, as this was an area the English regarded as their own backyard," James Hawes, author of The Shortest History of Germany, a Spiegel and Sunday Times bestseller, told DW.

"In 1879, British Prime Minister Benjamin Disraeli and Bismarck came very close to an alliance with Britain, Germany and Austria, which would have changed the entire course of European history," Hawes said. The problem, he added, was that Disraeli lost the 1880 election and Bismarck "hated" his successor, William Gladstone, rendering any cooperation impossible. Thus, Bismarck had to go it alone in the South Pacific.

Hawes describes Germany's colonization of the South Pacific as "a deliberate geopolitical move" — one intended in part to address the domestic political situation. "Bismarck's aim was to raise tensions with England in safe places for the benefit of the press so that the pro-English German liberals, who are now united, who have the crown prince as their figurehead, will never be able to get traction," Hawes said.

Read more: How a Cologne museum is dealing with its colonial heritage

As Britain was seeking German "support on other matters more urgent," it did not stand in the way of Germany's taking northeastern New Guinea in 1884, Bomholt Nielsen said, even though this meant that Germany now abutted a British protectorate to the south.

"But this angered [British colonies] Australia and New Zealand, who felt betrayed, leading to the phrase 'bless the queen and curse the Colonial Office,'" Bomholt Nielsen said. "So, while the German presence in the Pacific at the time was marginal, it had indirect implications for the British imperial system."

From German to Australian hands

The outbreak of World War I in 1914 drew Germany into conflict against Britain, among other parties. In the first year of the war, Germany saw its South Pacific colonies fall to Japan, a British ally, and Australia, then a semi-independent dominion of Britain.

"Australia and New Zealand enter World War I, without even being asked by Britain, as they've been gunning for the Germans for decades," Hawes said. "The Australian and New Zealand governments were constantly harassing the British government to take action against the Germans in the South Pacific, so, when the chance came, they grabbed these colonies straight away."

"It's not that the Germans agreed to hand the territory over," Hawes said. "They had no choice. Like a lot of things, it's the result of Bismarck's disastrous policies."

Following the country's defeat in WWI, the Treaty of Versailles in 1919 stripped Germany of its colonial holdings, including German New Guinea. This came under Australian control, finally earning its independence as part of Papua New Guinea in 1975.

Save for the use of a few German words, German influence in the South Pacific is not so tangible today, and very little attention is given to the German rule over this part of the world. This may be explained by a number of key facts.

Compared with those of other major European imperial powers, Germany's colonial era was relatively short. Spain dominated a large swath of the Americas for 340 years from 1492 to 1832 and only lost its last Caribbean colonies in 1898. Germany's overseas colonial era was a comparative blink of an eye. Yet, despite its brevity, German colonial rule was often bloody and violent.

Germany has made tentative steps in recent years to redress the memory lapse over its colonial past. These include an exhibition on the subject that took place at the German History Museum in Berlin three years ago and prospective apologies to nations that suffered under German colonial rule, with Namibia and the 1904-08 genocide as perhaps the most prominent example. Political relations with Namibia have been tense lately: The African nation wants an apology, which, as yet, has not been proffered.

And, of course, more attention is paid to Germany's even-bloodier mid-20th-century history, meaning that the colonial era is less present in collective memory.

New Caledonians have voted against a proposal to gain independence, marking a milestone moment in a decades-long decolonization effort. The South Pacific territory has been a French colony for nearly 170 years.