Thousands of Ugandans have signed a petition calling for roads honoring British colonial figures to be renamed. The appeal comes amid the killing of George Floyd and the subsequent Black Lives Matter protests. 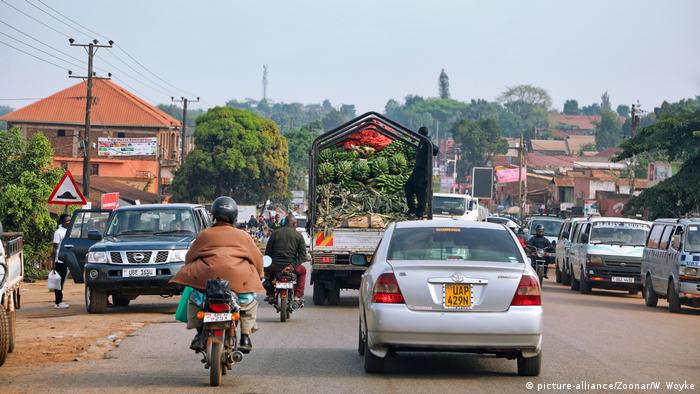 Uganda's capital, Kampala, especially the more affluent suburbs, bristle with streets and roads named after figures associated with Britain's colonization of the country.

Running through the center of the city and past Kampala's impressive Independence Monument is Speke Road, named after the British explorer and officer John Hanning Speke, the first European to identify the source of the Nile.

Then there's a slurry of streets named after colonial administrators, such as Henry Johnston, Henry Edward Colville and Frederick Lugard, plus those dedicated to the British royal family ranging from Anne and Charles to Queen Elizabeth II and her husband.

But in the wake of the police killing of George Floyd in Minneapolis and the subsequent protests around the Black Lives Matter movement, a group of Ugandans is renewing its push for the government to get rid of these names.

On June 9, the day Ugandans celebrate National Heroes Day, the group set up a petition calling for the decolonization of street names in Kampala and elsewhere in the country. Thousands have since signed it.

'Why should we have their names on our roads or monuments?'

"People feel passionate about the issue," said Apollo Makubuya, a corporate lawyer and author of a book about Uganda's independence struggle, who set up the petition.

Read more: Time for Africa to rid itself of racist colonial relics

He has been campaigning for the name changes for more than a year now, pointing out that many celebrate "soldiers" behind the "British military occupation" of Uganda, which gained independence in 1962 after more than six decades under British rule.

"Why should we have their names on our roads or monuments in their memory?" Makubuya asked in an interview with DW.

He adds that those who argue colonial names should be retained because they form part of Uganda's history often don't know exactly what the figures did.

"If you go deeper and ask people, including our leaders, what they remember about specific individuals, you will be surprised that most people do not know," he said.

But when they find out, "they are not happy about the things these people did."

Statues and monuments have been defaced or removed in Belgium, Britain and cities across the United States in recent weeks as protesters galvanized by Floyd's death challenge racial inequality across the countless aspects of everyday life.

"The death of George Floyd and events in the United States are symbolic of a bigger issue that affects the world. It's about ending a culture which glorifies colonial conquest, occupation, subjugation and control," Makubuya told the Reuters news agency in a separate interview.

Historian John Bosco Kalule, professor at Makerere University, is also behind the campaign to rid Kampala's streets of colonial names. Rather, he said, the roads should honor local heroes who "have played a big role" in Uganda and worked for the country's good.

In 2017, the Kampala Capital City Authority developed guidelines on how to name and rename roads in Kampala to make sure all streets had names and make it easier to navigate around the city.

According to the Independent, a Ugandan news site, this has resulted in more roads being named after local elders.

Although the colonial-era names still stand, Kampala Mayor Erias Lukwago has said local authorities support removing them. He has warned, however, that this will take time.

"There is no reason why we should celebrate dictators and people who violated our rights, people who participated in the slave trade ... all those people who committed atrocities against Ugandans during that period, it's a matter we are taking seriously," he told DW.

"But we have to be more careful in taking a decision because it's not that easy to decide [whose name] should be on the road and who shouldn't be," he said.

From Berlin to Barcelona, thousands of people are rallying against racial inequality and police brutality. The protest movement was denounced as "reckless" for ignoring social distancing rules. Follow DW for the latest. (07.06.2020)