The German Museums Association has underscored the importance of non-European perspectives when dealing with artifacts taken during German colonialism. Restitution is harder than with Nazi-looted art, an expert said. 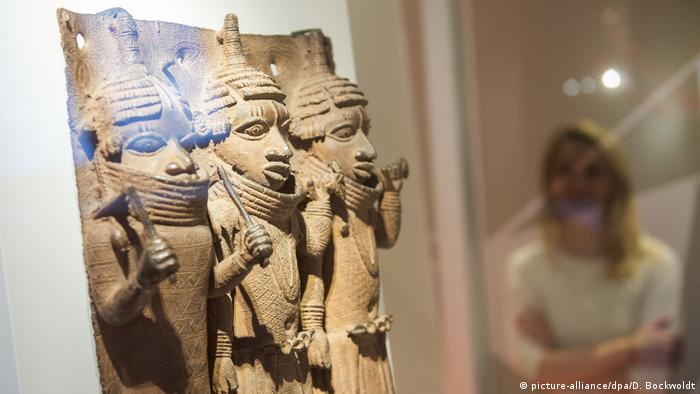 A Namibian bible and cow whip and the ancestral human remains of indigenous Australians: Such items, once exhibits in German museums, have been recently returned to their countries of origins. But even as museum directors have increasingly confronted Germany's colonial past through the items in their collections, the guidelines on the return of objects acquired in a colonial context have needed to be constantly reworked.

On Monday in the northwest German city of Bremen, the German Museums Association (Deutscher Museums Bund) presented the reworked version of its Guidelines on Dealing with Collections from Colonial Contexts. Originally formulated in 2013, the updated guidelines are the second reworking of a 2018 version and expand the focus from how to deal with human remains to how to deal more sensitively with non-European perspectives.

The working group behind the new version described it in the text as entering "uncharted territory."

"The topic of rehabilitation is not new for museums. What is new is the intensity driving the debate forward," Eckart Köhne, the president of the German Museums Association, said in Bremen at the presentation of the reworked guidelines.

There is currently no standardized legal basis for the restitution of colonial exhibits in museums' collection; only considerations of ethnic claims apply. These demand a high level of participatory willingness from German museums, which is why the guidelines call for directors and curators to be independently active.

According to Köhne, the rework particularly focused on making sure that specific objects of relevant importance could be voluntarily returned to their places of origin.

Restitution and reconciling the past

Another element of the reworked guidelines appears torepresent a new awareness in how to deal with Germany's colonial past. The German Museums Association overhauled the guidelines in collaboration with curators and researchers from multiple countries affected by German colonialism including Australia, Namibia and Samoa, as well as seven external authors from such countries.

"Representatives of the communities from where these objects originate want to discuss their issues on an equal footing with the museums," the guideline's introduction read.

"It is by no means always simply a matter of returning these objects, but mostly about participation ... This provides a tremendous opportunity to learn more about the objects and their contexts, and to shape the future of the German museum landscape together."

Köhne called for a complete digital, accessible inventory of museum collections. "Representatives of the societies of origin [of the exhibits] want to know where their cultural assets are and how they can access them," he said. The project of restitution is a long one, he underscored, added that the process of handing back Nazi-stolen artworkhas shown that short-term projects often don't work.

Art taken in the context of colonialism is more challenging to deal with than Nazi-looted art since it took place over multiple continents, Köhne believes. Whereas the Washington Principles on Nazi-Confiscated Art, which established a basis to return Nazi-stolen art, was published in 1998, Köhne believes restitution of colonial art still has a long way to go.

He said the current levels of financial and human resources dedicated to the task of restitution were insufficient and called for each museum to have a team of seven to eight people dedicated to creating a digital inventory. Germany's 16 states and local governments must provide the money for these additional activities and personnel, he said.

Köhne did not totally write off short-term measures, however, stating that museums should clearly state in exhibit descriptions how the items came to be in their collections.

"Museums must develop an awareness of how important this work is," Köhne said. "But I don't think that will be a problem here. There is great awareness of the issue."