Although Germany isn't logging record cases like its neighbors, Health Minister Lauterbach said current figures don't show the whole picture. Data reporting has slowed over the holidays — but the omicron variant has not. 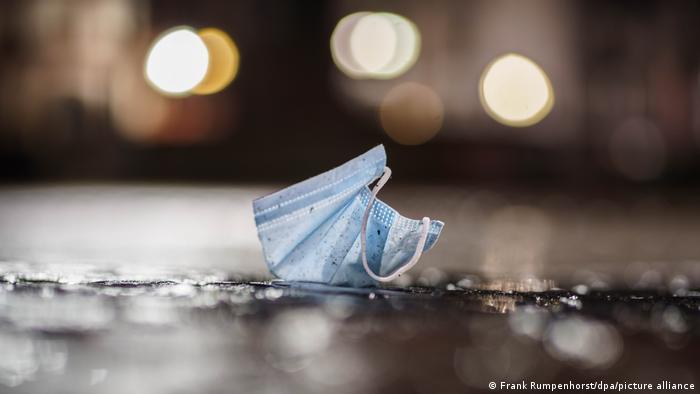 Health Minister Karl Lauterbach said the new number of coronavirus cases in Germany is likely much higher in reality because of "significant underreporting" over the Christmas and New Year holidays.

The warning comes as the omicron variant is rapidly spreading throughout the country and amid concerns from experts about potential infection spikes during New Year celebrations.

Speaking in Berlin on Wednesday, Lauterbach said Germany's current seven-day incidence rate was likely "two or three times as high" as the current rate of 205 cases per 100,000 people.

That incidence is less than half the rates being regularly recorded in late November and early December, and far less than in several neighbors at present, with a fourth wave in Germany that predated the omicron variant seemingly starting to wane early this month. Then, over the Christmas weekend, the rate of reduction accelerated further with fewer testing opportunities and fewer people at work.

Data also suggest that omicron was late to take hold in Germany, but it is now starting to spread fairly rapidly, prompting health experts to fear a marked increase in cases similar to those seen in the UK, France, the US and elsewhere in recent weeks.

"I do not believe the drop in the overall case numbers to be sustainable. And we'll have to react to that," Lauterbach said.

Looking ahead to New Year's celebrations on Friday, the health minister urged for people to celebrate in groups as small as possible to curb the spread of omicron.

The health minister's concerns are shared by medical and infectious disease experts.

Uwe Janssens, who heads the German Society of Internal Medicine and Intensive Care, told DW in an interview that reliable data on the proportion of the omicron variant in Germany is currently unavailable as COVID reports have been delayed and testing volumes have dipped during the Christmas holidays.

"It can be assumed that the omicron variant will certainly dominate in January, like in the other countries such as Great Britain, Norway, Denmark and Portugal," Janssens said.

'We can expect a significant number of infections,' says Uwe Janssens

"We can expect significant number of infections," he said. "We are recording daily growth rates of almost 50%," he added.

Though the situation in Germany is "definitely manageable," Janssens voiced concern over omicron's impact on the health care sector.

The rising infections because of the variant will likely lead to higher numbers of patients in intensive care units, he said. Although hospitalization rates appeared to be lower with omicron, he said the variant could still pose a significant threat to the health care system.

"Nevertheless, infections among [hospital] employees can lead to bottlenecks in the staff and thus increase the burden [on the health service] even more," Janssens said.

Germany introduced tighter restrictions ahead of New Year's Eve in an effort to curb the spread of the omicron variant.

The rapid spread of the variant has sparked record-breaking surges in new COVID cases in Germany's neighbors.

France reported a new record number of new daily cases on Wednesday, logging more than 200,000 over the past 24 hours. French Health Minister Oliver Veran described the spread of the variant as a "landslide."

The United States also logged a new record on Wednesday because of the omicron variant, Johns Hopkins University reported.

The country's seven-day average of new cases rose to 265,427 according to the latest data — surpassing the previous record of 251,989 set in mid-January.

Germany's data appear to show lower infections than other hard-hit countries, but government officials and experts say omicron's holiday impact will make itself known in the first few weeks of January.

German police are running "at full capacity all the time" and struggling to cope with stress as they deal with violent and aggressive protesters, the police union has said.

Smoking and drinking rise during pandemic

The coronavirus pandemic has seen an increase in alcohol consumption and smoking in some European countries, and younger people are worst affected.