German police are running "at full capacity all the time" and struggling to cope with stress as they deal with violent and aggressive protesters, the police union has said. 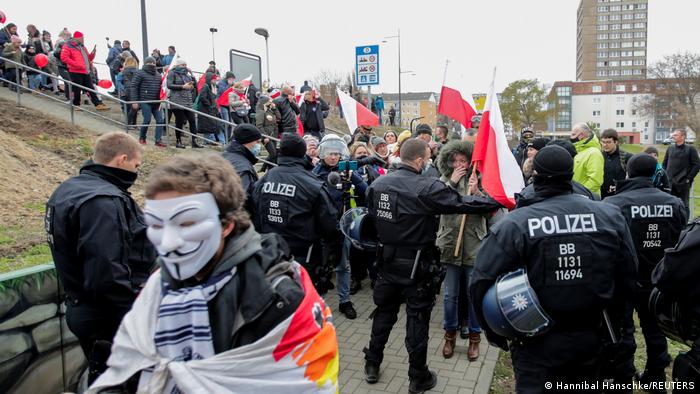 German Police Union (GdP) said it was concerned about the psychological consequences faced by police officers deployed at protests against COVID-19 measures.

Police officers are deployed from one state to another to deal with the numerous demonstrations taking place across Germany, he said in comments published Wednesday.

Last week, thirteen police officers were injured in the southwestern city of Mannheim as protesters reacted angrily to authorities attempting to end an unauthorized march against coronavirus restrictions.

"Managers are working hard to reduce the stress on their staff, but this is becoming increasingly difficult," the GdP chief said.

"In recent years, the federal states have hired significantly more personnel in the psychological service of the police," he said.

Malchow also pointed out that "[s]tressful situations, violence against police officers and also verbal violence and humiliation do not only take place during demonstrations."

The union chief said that while an increasing number of officers were accepting psychological counseling, they were only helpful when offered soon after the incident.

"When officers are sent from assignment to assignment, it all piles up," Malchow said.

He added that the police needed more personnel to deal with this challenge. "We're running at full capacity all the time right now, and that load is doing something to my colleagues."

Manuel Ostermann, the deputy chairman of the German Police Trade Union (DPoIG) said staff cuts were the main reason for the problems.

"This is now hitting us in all areas, including with coronavirus measures," he told mass-circulation newspaper Bild in comments published Wednesday.

Countless anti-lockdown and anti-restriction rallies were held across Germany since the pandemic started some two years ago. In recent days, another wave of protests saw thousands rally across dozens of German cities to protest coronavirus measures.

These protests came in response to new restrictions on private gatherings and a ban on spectators at public events ahead of New Year celebrations.

In the state of Mecklenburg-Western Pomerania alone, more than 15,000 people took to the streets in 20 cities, according to German police.

In the eastern state of Brandenburg, around 9,000 demonstrators protested, according to police.

The city of Munich has explicitly banned such marches on Wednesday and Thursday.

People taking part in these unauthorized coronavirus demonstrations could now face fines of up to €3,000 ($3,391).