The total number of omicron cases detected in Germany rose sharply with the latest figures, which were the first to provide testing results and data from a working day after the Christmas break. 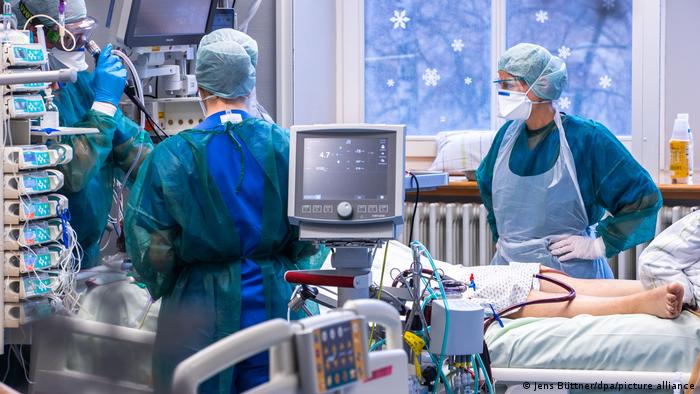 German health authorities reported an additional 3,218 cases of the so-called omicron variant in patients in Germany on Tuesday, a jump of 45% in one day.

The Robert Koch Institute (RKI) for infectious diseases announced it had detected a cumulative total of 10,442 cases of the omicron variant.

The more infectious variant is likely to spread further, according to the RKI, and  soon to become the dominant variant in the country.

Four people have died after testing positive for the omicron variant in total in Germany. Three of those were aged between 60 and 79, and one person was between 35 and 59 years old. The first omicron death was reported by the RKI on December 23.

The RKI only counts omicron cases which are verified by genome sequencing or variant-specific PCR tests. It also said that many people are on vacation and that many doctors' offices were closed in recent days over Christmas, meaning that many cases may have been undetected.

In absolute numbers, North Rhine-Westphalia accounts for the most omicron cases so far, with 3,476 cases, followed by Bavaria with 1,896 and Hamburg with 1,487.

Germany has introduced new restrictions to combat the spread of the coronavirus over winter, but restrictions are generally slightly less severe than in earlier lockdowns.

Germany's vaccination campaign has been reignited with the uptake of booster shots, thought to help protect against the omicron variant.

However, Germany has so far failed to achieve its goal of 80% vaccination rate, postponing the milestone to the end of January.

About 70% of the population, or 58.9 million people, are fully vaccinated. However, owing to probable gaps in reporting, this figure may be 5% higher, according to the RKI.

Kristine Lütke, Bundestag Member for the FDP and a member of the parliamentary health committee, said Germany's vaccination campaign would target migrants and old people in a bid to reach an 80% vaccination rate by January.

German Epidemiologist Timo Ulrichs said he believes it is possible that the coronavirus pandemic will weaken to endemicity in 2022 as a result of population contagion and vaccination.

"It could be as early as next year that the coronavirus in the form of the omicron variant loses its pandemic potential," the scientist from Berlin's Akkon College of Human Sciences told news portal Watson.

He cited vaccine coverage and a possible fourth dose as contributing factors to it losing its ferocity.

Ulrichs cautioned, however, that should a more aggressive and different virus variant emerge, it could throw a spanner in the works.

Germany's highest court has said officials must draw up rules to protect disabled people during pandemic triage situations. It's an urgent issue, with Germany facing a huge new COVID wave fueled by the omicron variant.