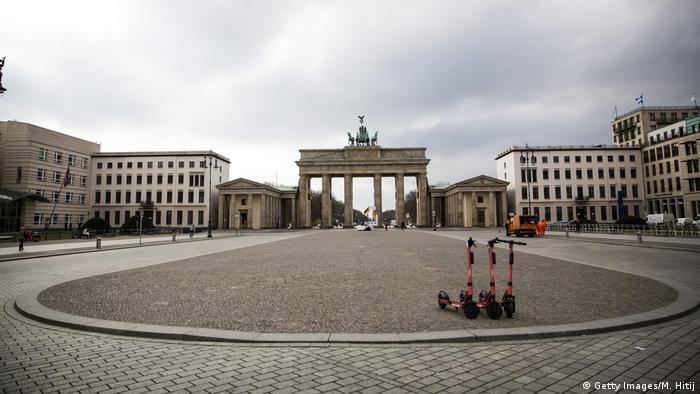 Germany is not planning to relax current restrictions on public life before April 20, Helge Braun, the head of Angela Merkel's Chancellery, has told a national newspaper.

Braun made the comments just days after the country introduced sweeping nationwide measures in a bid to slow the spread of COVID-19. This week, most food and entertainment outlets shut down, along with schools, universities and non-essential shops.

"We will not discuss any relaxing [of restrictions] until April 20, and until then, all measures will remain in place," Braun told Der Tagesspiegel, adding that it should be clear after Easter whether the restrictions have slowed the spread of coronavirus.

Read more: Coronavirus latest: US outbreak surges to over 100,000 cases

"If we manage to slow the rate of infection so that it takes ten, twelve or more days for cases to double, then we know we're on the right track," said Braun.

Coronavirus infection rates in German are currently doubling every three to five days. The latest figures for the country from Johns Hopkins University show over 53,000 infected and 395 deaths.

Even when the restrictions have eased for others, social distancing measures would likely continue to apply to the elderly and those with underlying health conditions until there was a vaccine, added Braun.

Braun favors the approach used in South Korea, which employs a mix of widespread testing and digital tracking, to keep track of the spread, reported newspaper Die Welt.

German Chancellor Angela Merkel, who is also in quarantine, on Thursday asked Germany's population to have patience with the strict measures.

How long are other countries keeping measures in place?

China: Wuhan, the Chinese city where the outbreak began, has begun easing restrictions two months after the city was placed on lockdown. Banks have already re-opened and bus services have started operating. People are now permitted to travel into the city, but travel restrictions will remain in place until April 8 for those hoping to leave. The airport will also re-open to internal air traffic from this date.

Italy: Tight restrictions on public life have already been implemented for several weeks and are officially set to remain until April 3, but these could be extended to July 31. Italy's death toll has already vastly overtaken China's official toll, at 9,134.

Italy's National Institutes of Health said there had been a slowing of infections in recent days but rates are still the second-highest in the world and deaths have surpassed 9,000.

Spain: The Spanish government this week extended its two-week lockdown for another fortnight. Prime Minister Pedro Sanchez said he hoped that prolonging the containment measures would help bring this "nightmare" "to an end soon."

US: President Donald Trump said he wants the economy reopened by Easter, which falls on April 12. However, the country now has the most confirmed infections in the world at over 100,000.

Britain: The UK's strictest measures began on Monday. Prime Minister Boris Johnson promised to review them after three weeks. Senior health advisors have advised that the elderly and those with existing health conditions may have to remain under lockdown for 4 months. Some scientists think the country will need to move in and out of lockdown to stem further spikes in cases.

Ireland: Hours after announcing a nationwide lockdown, Ireland's health minister on Saturday said the measures were so strict they couldn't remain in place for long. But he ruled out the idea of life returning to normal at Easter.

The Chinese government wants to get the economy back on track, and says the coronavirus epidemic is virtually over. But experts fear that Beijing may be ignoring a still-existing hazard. (28.03.2020)

Thousands of European tourists are stranded in Nepal, Sri Lanka and other locations across Asia. Germany has arranged emergency flights to bring citizens home as countries close their borders due to the pandemic. (28.03.2020)

A tearful 11-year-old in a Bavarian town contacted emergency services as he was unable to find his mother. The police managed to soothe the boy’s fears by rushing to his home and serving up a treat. (27.03.2020)