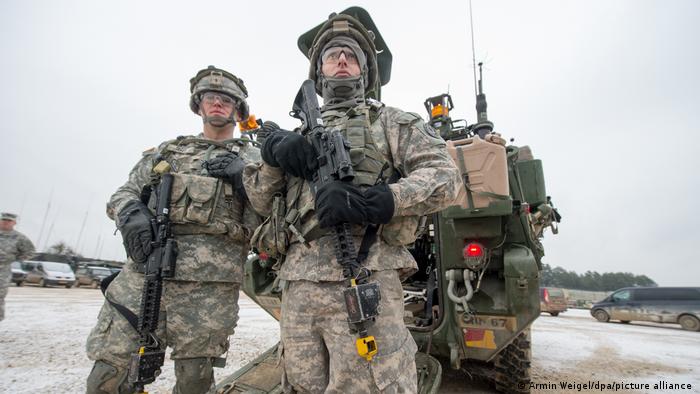 German Foreign Minister Heiko Maas expressed relief on Friday over a move by US lawmakers to halt planned troop reductions that would see thousands of soldiers leave Germany.

"As things stand we have never been given any information about the troop reductions that were announced in July, so we can't say what the plans are or if they even exist," Maas told reporters.

"But we are glad that there appears to be agreement between Republicans and Democrats in Washington on revisiting this decision," he added. "American soldiers are welcome here. They contribute not just to Germany's but also to Europe's security."

What did US lawmakers agree?

Late Thursday, US lawmakers from both parties agreed a final version of the nation's annual defense spending bill — which included a section expressing support for US troops to remain in Germany.

The bill bars the withdrawal of any troops in Germany for 120 days until the secretary of defense submits an analysis of the impact of the withdrawal. The bill still needs to pass Congress and also faces a potential veto from outgoing President Donald Trump.

In June, Trump announced plans to withdraw some 12,000 soldiers out of the approximately 34,500 stationed across Germany. There has been a major US military presence in Germany ever since 1945, with troops in the former West Germany effectively the advanced guard for a feared Soviet invasion during the Cold War.

Other German politicians have welcomed the move, saying it could signify a renewal of German-US relations.

Thomas Silberhorn, a junior minister at the German Defense Ministry, told DW the move at the very least buys German officials time to hold talks with their US counterparts.

"It is a preliminary hold — in order to reconsider the situation, in order to define American interests and also in order to have consultations with Germany and Europe as NATO allies, and we hope to be able to take this opportunity, to put forward our arguments," he said.

Kiesewetter, who is a former military officer, said the presence of US troops in Germany was significant not only for Washington's ties with Berlin, but also for wider defense decisions in the region.

An previous version of this article stated that Trump made the troop withdrawal announcement in July, when the announcement came in June. This has now been corrected. DW apologizes for the error.