Europe's low pressure system Ahmet is the first of 14 wintertime highs and lows named to highlight the continent's diversity. 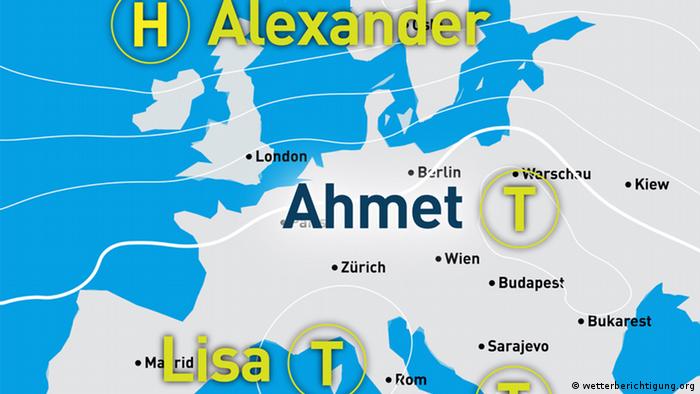 Germany's DWD weather service on Tuesday used Ahmet as the official name for a low pressure system over Romania that's headed for Germany and Poland and set to bump into Lisa, another low over Italy, and Alexander, a high over Scotland.

Fourteen sponsored names designated by the Institute for Meteorology at Berlin's Free University await Europe in the coming months, including Bozena and Dimitrios.

As part of a campaign by journalists from migrant backgrounds, names from Arabic, Kurdish, Slavic and other communities will feature on Germany's weather maps in 2021, supplementing classic German names such as Günter and Angela.

"So far, our weather had mostly typical German names only, even though some 26% of people in Germany have migrant roots," declared NdM chair Ferda Ataman, who along with other diversity advocates challenged Interior Minister Horst Seehofer in July to examine police attitudes to racism and racial profiling.

"Making the weather more diverse is only a symbolic step ... What's important is that social diversity finally becomes normal, everywhere," said the Berlin-based journalist from Bavaria who has Turkish parents.

'We hijack the weather'

The weather-naming campaign, termed "we hijack the weather," was joined Tuesday by media worker groups in Austria and Switzerland, with the Swiss contingent calling for "anti-racist reporting and more diversity in editorial offices."

On their joint website, they called on media outlets, including newspapers and broadcasters, to commit to a 30% employment quota by 2030 for journalists, presenters, actors and other media staff, reflecting so-called "migratory backgrounds" in each country's demographics.

"Diversity is, of course, more than making migration visible: People with disabilities, different genders, religions, homosexual people and others should be involved and visible everywhere," said the campaigners.

Among media professionals in Germany, they estimated that only between 5-10% of people employed actually had migration backgrounds.

Some 26% of Germany's 83-million population has migratory backgrounds, according to the federal statistics bureau, Destatis.

Two-thirds of these 21.2 million persons originate from other European nations; half — about 11.1 million — have held German citizenship since birth; and some 29% come from Africa, the Americas and Asia, including Oceania.

In Switzerland, people with migratory backgrounds make up 38% of the permanent resident population, estimates the Swiss BfS statistics office. About a third of them have Swiss nationality.

Berlin's Institute for Meteorology allocates annually sponsored names for between 50 and 60 high pressure weather zones and about 150 low pressure zones.

Mathematically, the 14 names sponsored by diversity campaigners would need to be multiplied three-fold to reflect Germany's demographics recorded by Destatis.

Kosher food, Jewish holidays and theater mark a year-long celebration of the diversity of Jewish culture in Germany dating back to the 4th century.