Germany vs. South Korea kicked off at 4 p.m. German time. And only around 30 percent of German workers were expected to keep their noses to the grindstone until the end of their shift. But skiving off may boost morale. 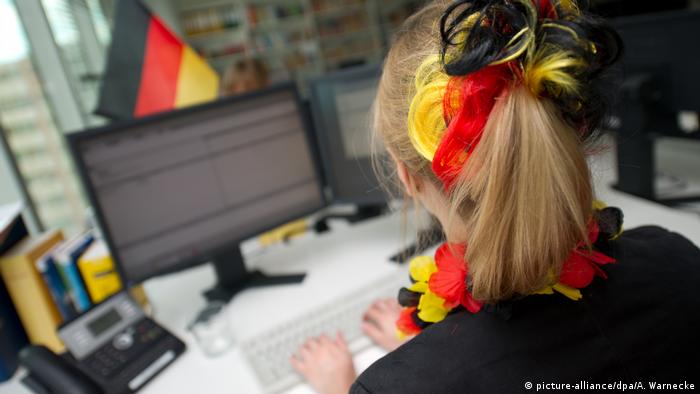 As Germany's eyes turn to the screen to watch the German football team's decisive World Cup group game against South Korea on Wednesday, it has been estimated that the game could cost German employers up to €200 million ($233.3 million).

The Institut der deutschen Wirtschaft (IW) told the newspapers belonging to the Funke Mediengruppe that it expected only around 30 percent of employees to continue to work after kick-off at 4 p.m. local time (1400 GMT/UTC).

Read more: World Cup 2018: Who needs what to advance to the knockout stages?

If every second person watches the game during the last hour of the working day and does not make up for this lost work time, the institute estimates the cost to employers could be between €130-200 million (roughly $150-230 million).

But, the researchers emphasized that the experience of watching a football game with colleagues at work could strengthen team spirit in the office, which in turn could have a positive impact on productivity in the following days.

"It's not always about money, but also about teambuilding – and there's certainly nothing better than watching an exciting football match together with your colleagues," said IW labour market expert Christoph Schröder. "Let's just hope the German team wins."

In terms of raw costs to the German economy, calculations become more complex again. Some of the workers leaving the office early might be heading to a favorite bar or restaurant to watch the game with friends, so gains in some sectors are as likely as losses in others.

5 ways the football World Cup has transformed Moscow - for now

"This is a Moscow I don't know" has become the rallying cry of the Russian capital's residents since the World Cup started. The tournament has seemingly pressed pause on laws – and has changed the city's public space. (21.06.2018)

World Cup: I sublet my Moscow apartment to football fans

Around 2 million foreign fans have come to the Russian capital for the World Cup. DW correspondent Yulia Vishnevetskaya shares her experience of renting out her central Moscow apartment. (26.06.2018)