Germany, US revive security cooperation | Germany | News and in-depth reporting from Berlin and beyond | DW | 13.04.2021 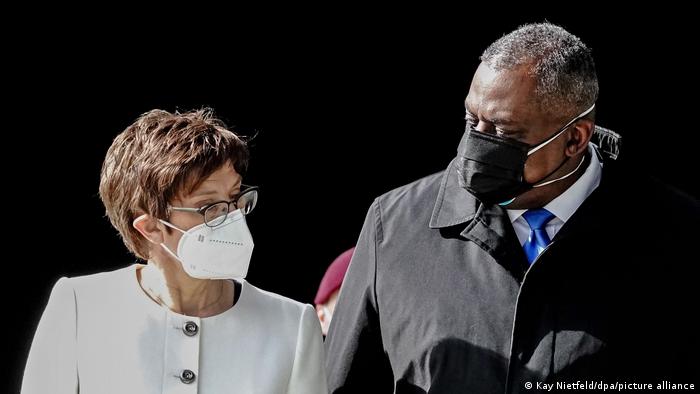 Germany is getting 500 more US troops. US Defense Secretary Lloyd Austin made the announcement at a news conference with German Defense Minister Annegret Kramp-Karrenbauer on Tuesday in Berlin.

"These forces will strengthen deterrence and defense in Europe," Austin said. "And, if necessary, fight and win."

If the deployment bears out, which Austin said could happen as early as the fall, it would reflect a sharp departure from the policies of Former President Donald Trump. In 2020, Trump said he wanted to move as many as 12,000 US troops out of Germany — as well as the headquarters of the US military's European and African Commands.

"Today's visit and the approval of new troops send a very strong signal about the alliance between America and Germany," Kramp-Karrenbauer said. "The American decision to do this encourages us in Germany to further contribute" to strengthening both the bilateral and NATO partnerships.

Austin's visit is part of a tour including visits to key allies such as Israel, the United Kingdom and NATO in Brussels. He served in Germany during his military career, but this is his first trip as defense secretary: a civilian role. He is also the first Biden administration official to make an in-person visit to Germany.

His presence in Europe comes as pressure mounts on multiple fronts. Russian troops appear to be massing along Ukraine's border. An Afghanistan withdrawal deadline looms. Israel is suspected of sabotaging an Iranian uranium enrichment facility, which happened while Austin was in Israel and as European countries attempt to restart nuclear talks with Iran.

Easy solutions to these and other global security problems are in short supply, and the alliance remains divided over several of them. The high-ranking US visit is part of the Biden administration's diplomatic effort to reestablish the United States as a leader in managing global stability, and to reassure nervous allies shaken by the former Trump administration's often dismissive, sometimes bullying tone.

"You can't overstate the signal Lloyd Austin gave by making his announcement," Thomas Kleine-Brockhoff, vice president of the German Marshall Fund, told DW. "That doesn't solve anything, but it gets you on track to talking about things completely differently."

News of extra US troops was unexpected, Kleine-Brockhoff added, saying it puts the ball in Germany's court as it evaluates its own commitment to the military alliance.

It is unclear if the announcement is a direct response to Russian troop activity near Ukraine, which Kleine-Brockhoff said is a Russian effort to test the Biden administration. It also presents a challenge to NATO in how to respond, as the alliance sees itself as responsible for defending eastern Europe.

Despite short-term success at halting a Russian advance in Ukraine, the West has "failed to turn it into a political process that gets us any step closer to a longer-term solution. How prescient that is, the Russian troop movements are showing us," he said.

Top brass get down to brass tacks

Like Trump, Biden opposes Nord Stream 2, an undersea gas pipeline that could double Russian natural gas sales to Germany. Biden has called it a "bad deal" for Germany and looks set to continue a policy of sanctions from the Trump era in hopes of killing the project.

The German government defends Nord Stream 2 as a commercial deal divorced from geopolitics. The US and many of Germany's European allies say that is naive, worrying that it undermines climate goals and jeopardizes both German and European security. They want to cut off Russian state coffers, which can fund saber-rattling near Ukraine and elsewhere, from a potentially lucrative source of revenue.

In a possible step towards resolution, the German government's coordinator for trans-Atlantic relations repeated his call for a moratorium on pipeline construction.

"It is an obstacle to restarting the German-American relationship," Peter Beyer told DPA, the German Press Agency, during Austin's visit.

Defense spending is another holdover from the Trump years — and the Obama ones before that, when Joe Biden was vice president.

Trump frequently berated Germany for not meeting spending targets, which NATO members agreed to set at 2% of national GDP. His administration often overlooked the fact, however, that members have until 2024 to do so.

Germany's defense budget has increased by about one-third since 2013, according to NATO figures, but that remains below the NATO median. It is also one of the western alliance's few members to fall short of a lesser-known metric — that 20% of spending goes towards equipment.

On Tuesday, Austin said he would like to see military spending pick up, but acknowledged Germany's progress and that it still has time to fulfill its commitments.

From Berlin, Austin plans to head south, where Germany hosts one of the largest contingents of US troops abroad. Their decades-long presence is broadly supported for symbolic, security, and economic reasons.

The military lovefest is not total, however. A strong antiwar and anti-nuclear streak runs through German postwar history, which the ascendant Greens are tightly connected to. The party is in a strong position to join the next government after September's general elections, and possibly even run it.

The Greens campaign platform is supportive of NATO and transatlantic relations while calling for a nuclear-weapons-free Germany. That would undo US military planning and contradict NATO's nuclear sharing policy.

"Aside from the ethical aspects, nuclear sharing is a completely outdated and unsuitable answer to the wide range of current threats that NATO faces today," the Greens' Tobias Lindner, who chairs the German parliament's defense committee, told DW in a statement.

Lindner, who considers himself a staunch supporter of the trans-Atlantic partnership, last month voted to extend Germany's military mission in Afghanistan under the NATO umbrella. Most of his party colleagues voted against it or abstained.

When and how to withdraw after 20 years in Afghanistan was a top issue for Austin's meeting with Kramp-Karrenbauer. At a news conference last month, Biden said the US does plan to withdraw its own troops at some point, but unlikely by a May 1 deadline. Both sides say they will consult each other before making any decisions.

That is especially critical for Germany, whose troops often rely on US firepower when they get into trouble on the ground.

The US announced two aid packages for Ukraine and its neighbors totaling almost $2.7 billion as Blinken made an unannounced visit to Kyiv. DW rounds up the latest.

As at US-led meeting in Germany, supporters of Ukraine were seeking donations for winter equipment as the conflict grinds on. Western powers praised military gains, but warned more aid was needed.