Germany says it will use its time on the UN Security Council to reduce the number of child soldiers. There are currently around 250,000 children being used as soldiers around the world, according to the UN. 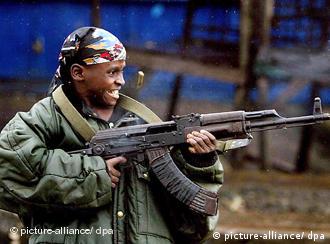 This child soldier in Sierra Leone is one of thousands

Germany has said it will be using its two-year seat on the UN Security Council to take up the fight against child soldiers in "a much more active way," according to German UN Ambassador Peter Wittig.

"The perpetrators will have to feel the consequences, if necessary, with sanctions," said Wittig.

An important first move is to identify the nations where the practice takes place, he added.

On February 12, 2002 an international accord was signed that banned the practice of allowing children to fight in military conflicts. Since then, every Feb. 12 has been celebrated by the Red Hand Day campaign, which aims to draw attention to the continuing phenomenon of young combatants.

Despite the accord, according to UN figures some 250,000 children in Asia, Africa and Latin America are currently fighting in some kind of violent conflict.

"In addition to being made to fight, I was repeatedly raped by the commander on countless occasions," recounted Grace Akallo, who was 15 years old when she was captured by Ugandan rebels. Mercenaries stormed her school to recruit teenagers to fight in their faction. 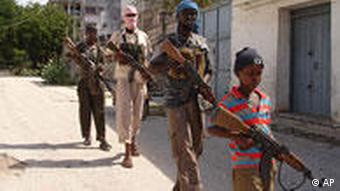 The practice is not only prevalent in crisis-ridden regions of Africa, but also in Afghanistan. There, the police and military have officially recruited minors as soldiers in order to meet the demands of international forces.

The Afghanistan government has recently vowed to stop using child soldiers and signed a special accord with the United Nations. The UN ambassador in Afghanistan, Radhika Coomaraswamy, called the decision an "unequivocal success.”

"On the issue of children everybody is united. Every moral voice in Afghanistan wants it eradicated," said Coomaraswamy.

Many warlords in Afghanistan own young male sex slaves, some younger than nine years old, who are forced to dress up and dance in front of men. They are often raped by their tormentors.

The UN-Afghan accord is the first document that recognizes the existence of this practice. 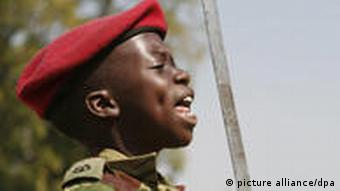 Germany has pledged to crack down on states using child soldiers

However, the Afghan government and the United Nations only have limited powers in a country ravaged by tribal conflicts.

Germany's Wittig called the UN-sponsored international accord on child soldiers important, but was quick to add that many more had to follow for any real change to come about.

In July, Germany starts its 6-month chairmanship of the Security Council and can choose which areas the council focuses on. It appears that under Germany's lead, the UN Security Council will start getting tougher on those states who recruit children to fight for them.

Liberia's ex-president Taylor and his lawyer have shunned his war crimes trial, walking out in protest. The prosecution accuses Taylor of inciting a civil war, murder, rape, sexual slavery and using child soldiers. (08.02.2011)

In the eastern Democratic Republic of Congo, a group of former child soldiers are starting to rebuild their lives through drumming and theatre. But NGO Human Rights Watch is reporting a new wave of forced recruitment. (20.12.2010)

Slavery remains a scourge in many parts of the world, with the victims often being children. Deutsche Welle investigates what modern slavery means and takes a look at cases where kids are being enslaved. (15.09.2010)