Germany Urges Herero to Drop Lawsuit | Germany | News and in-depth reporting from Berlin and beyond | DW | 05.08.2004

Germany's ambassador to Namibia has called on the Herero people to drop a $4 billion (€3.3 billion) lawsuit filed three years ago in US courts for atrocities committed under colonial rule. 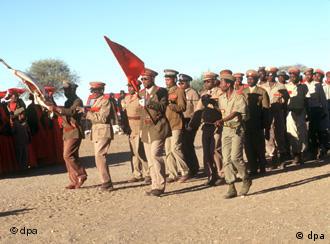 Ambassador Wolfgang Massing told a panel discussion on the 1904 Herero uprising against German rule that the case filed in a US court would "lead us nowhere" and proposed that other ways be found to deal with the "wounds of the past."

"The German side will not move as long as this court case is on the roll," Massing said late Wednesday. "It will not lead to any results. While it is necessary to remember the past we should move forward together and find projects that will heal the wounds of the past."

Some 200 ethnic Herero filed a lawsuit in the US court of the district of Columbia in September 2001 demanding $2 billion from the German government for atrocities committed under colonial rule.

Germany ruled Namibia, then called German South West Africa, between 1884 to 1915 before being forced to hand over the territory to South Africa after its defeat in World War I. Namibia won independence in 1990. 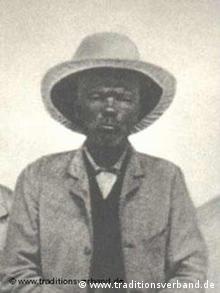 Henrik Witboi, one of the Herero chiefs involved in the uprising

Between 45,000 and 65,000 Herero died after German officers issued an extermination order against the tribe in 1904 to crush an uprising against colonial rule. Referring to the methods employed to supress the rebels, General Lothar von Trotha said at the time he would "wipe them out with rivers of blood." His policy was one of "blatent terrorism" and "shocking brutality."

The violent war against the tribe, which lasted until 1908, is remembered by Namibia's 120,000 Hereros as genocide.

The district court of Columbia was chosen to hear the case as it has a 215-year-old law on its books, the Alien Tort Claims Act of 1789, that allows for such civil action from foreign countries.

Meanwhile, several Herero representatives have reiterated calls for a formal apology from Germany and negotiations on a settlement.

"We want an apology and Germany should start a serious dialogue with us," said Festus Muinjo, one of the panelists examining the 1904 uprising. "The Herero issue will not stop, it will continue ad infinitum."

To break the deadlock, a German law professor has proposed the establishment of a reconciliation commission to deal with the issue.

"We should think of a reconciliation commission with leaders of the Herero people and Germany to work out an appropriate form of apology and possible reparation and hopefully an out of court settlement," Manfred Hinz said.

For its part, the German government acknowledges a "special responsibility" for Namibia, according to a parliamentary resolution from 1989. Since then, Berlin has sought to promote intensive and productive relations despite the difficult past.

Most visible of the cooperations is economic assistance. Germany is Namibia's largest donor country, and has provided aid for a number of development projects as well as culture programs.

Namibia on Sunday marked the 100th anniversary of the Herero Rebellion, remembering one of the darkest chapters of Germany’s colonial past in what was once German Southwest Africa. (Jan. 11, 2004)