Remembering the Herero Rebellion | News and current affairs from Germany and around the world | DW | 11.01.2004

Namibia on Sunday marked the 100th anniversary of the Herero Rebellion, remembering one of the darkest chapters of Germany’s colonial past in what was once German Southwest Africa. 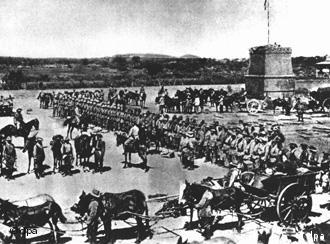 German Kaiser Wilhelm II sent thousands of soldiers to put down the Herero insurrection in 1904.

On January 11, 1904, Herero tribal leader Samuel Maharero called for his people to rise up and fight against their German colonial rulers in the southwestern part of Africa that would one day become modern Namibia.

Angered by encroaching German settlers, the dividing of their land by new railroads and the decimation of their herds of cattle, the Herero violently heeded that call and killed 100 German civilians and 13 soldiers in just a few days. However, those deaths would eventually elicit a response from the Germans that many Herero consider tantamount to genocide.

Completely unprepared for the unrest, Governor General Theodor Leutwein was unable to keep the insurrection from quickly spreading throughout the entire colony and after an unsuccessful six-month bush war the government in Berlin ordered 14,000 German soldiers to the region to put down the rebellion. Heading the force was Lieutenant General Lothar von Trotha, a man who already had a infamous reputation from other conflicts.

“You can say the whole thing became more brutal at that point,” Larissa Förster, a Namibia expert at the Museum for Ethnology in Cologne, told Deutsche Welle.

No quarter from von Trotha

After a decisive battle for the Germans on August 12, 1904 near the Waterberg, the surviving Herero fled into the Omaheke desert. What happened next still continues to haunt many Herero today. Confronted with the very real possibility of dying in the desert, many hoped to surrender to the Germans and head back to their lands. But on October 2, von Trotha ordered all Herero, armed or unarmed and including women and children, to be shot if they attempted to return.

Although the German Kaiser Wilhelm II and Reichskanzler von Bülow supposedly disagreed with this decision, they apparently also did little to stop von Trotha, who was now determined to exterminate the Herero, from carrying it out.

Those Herero that were not killed where eventually put in camps that many Namibians now compare to Nazi concentration camps. Forced labor, disease and malnutrition took their toll. By 1908, when the camps were emptied, an estimated 50 to 80 percent of the entire Herero population had died.

Like many modern historians, Förster from the museum in Cologne considers the Herero Rebellion the first genocide of the 20th century. “It was clearly a command to eliminate people belonging to a specific ethnic group and only because they were part of this ethnic group,” Förster said. 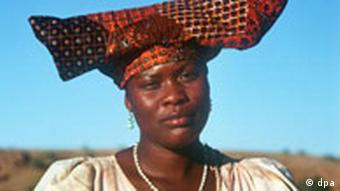 The Herero never completely recovered from the conflict and of the around 100,000 that today live in Namibia many live in poverty or work on the farms of white landowners.

In 2001, tribal leaders tried to sue Germany for compensation in U.S. courts, but the claim for $4 billion (€3.12 billion) never went very far. They also want reparations from Deutsche Bank, which allegedly profited from the forced labor in the camps.

“The war was a gruesome thing. Much blood flowed and there were many victims on both the German side and the side of the Herero. The German soldiers and settlers stole my land and my dignity and they killed my people. Something like that can never be forgotten,” Tjerimo Veseevete, a 75 year-old Herero man who lives not far from the Waterberg near Otumborombonga, told Deutsche Welle.

Germany has expressed its regret over the matter and professes it has a special responsibility is ensuring the future of Namibia, but has so far stopped short of an official apology. And since Berlin is Namibia’s single largest source of foreign aid, it also sees no need for specific financial compensation to the Herero.

The Namibian government, which is dominated by the Ovambo people, has shown little interest in backing the Herero claims. The German ambassador and a few regional officials attended the small ceremony marking the rebellion on Sunday in the Namibian capital Windhuk, but no government representatives took part.

German Foreign Minister Joschka Fischer issued a rallying call to all African nations to help solve the problems in Zimbabwe during his visit to South Africa on Thursday. (October 31, 2003)

Germany Steps Up its Presence in Africa

Not usually a focus of German foreign policy, relations with Africa are generating more interest in Berlin -- not least as a result of the War on Terror. (November 6, 2003)