The German military is planning to send four aircraft to northern Iraq to airlift goods to the many Yazidi stranded in the Sinjar mountains. The UN has declared its highest level of emergency for the humanitarian crisis. 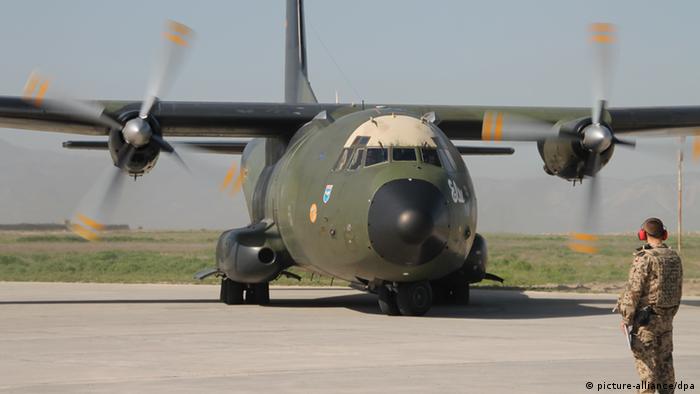 Germany plans to send aid to northern Iraq on Friday, according to national media reports. Four German Transall military aircraft are set to take off for Erbil, carrying 36 tons of food and supplies to UN organizations for further distribution, the dpa news agency reported on Thursday.

Discussion is ongoing whether Germany - which has a policy of not delivering weapons to war zones - should supply Kurdish fighters, Peshmerga, with arms to fight for the survival of the Yazidi minority.

The UN declared on Wednesday its highest level of emergency for the humanitarian crisis in Iraq. According to the Pentagon, however, far fewer Yazidis are stranded on Mount Sinjar in northern Iraq than first thought.

The "Level 3 Emergency" has resulted in variouswestern governments vowing to increase the amount of goods, funds and assets being supplied to the thousands of displaced members of Iraq's minority Christian and Yazidi communities.

Hundreds of thousands of Iraqi civilians have been driven out of their homes as the Islamic State (IS) group and its Sunni militant allies continue to advance through much of north and west Iraq, leaving the country facing its worst crisis since US troops withdrew in 2011.

The UN refugee agency (UNHCR) previously reported that tens of thousands of Yazidis had fled the Islamic State group's onslaught in order to seek refuge in the Sinjar mountain range.

However, on Wednesday, an American assessment team found "far fewer" Yazidis stranded on Mount Sinjar than first expected, with continued access to food and water from air drops.

As a result, the Pentagon said that an evacuation mission was "far less likely."

The plight of the stranded refugees was not as bad a previously feared, "in part because of the success of humanitarian air drops, air strikes on IS targets, the efforts of the (Kurdish forces) and the ability of thousands of Yazidis to evacuate from the mountain each night over the last several days," said Pentagon Press Secretary John Kirby.

The UN Security Council has also urged Iraqi prime minister designate Haidar al-Abadi to work swiftly to form "an inclusive government that represents all segments of the Iraqi population and that contributes to finding a viable and sustainable solution to the country's current challenges."

Abadi now has 30 days to build a team to dissolve sectarian tensions, after his nomination was accepted by President Fuad Masum on Monday.

According to the International Organization for Migration, more than half a million Iraqis have fled their homes since the Islamic State group began their offensive in June.

The UN has declared its highest level of emergency for the humanitarian crisis in Iraq. The Pentagon, however, has reported far less refugees on Mount Sinjar than first thought. (14.08.2014)

The Pentagon has said a possible US mission to rescue Yazidis trapped on Iraq's Mount Sinjar is less likely to take place after special forces assessed that there are fewer civilians trapped than previously feared. (14.08.2014)

Germany has pledged to send non-lethal military supplies to help the people suffering in northern Iraq. For now, the controversial export of weapons is being left to its allies - for very pragmatic reasons. (14.08.2014)