Germany mulls ′everything short of arms exports′ | Germany| News and in-depth reporting from Berlin and beyond | DW | 14.08.2014

Germany has pledged to send non-lethal military supplies to help the people suffering in northern Iraq. For now, the controversial export of weapons is being left to its allies - for very pragmatic reasons. 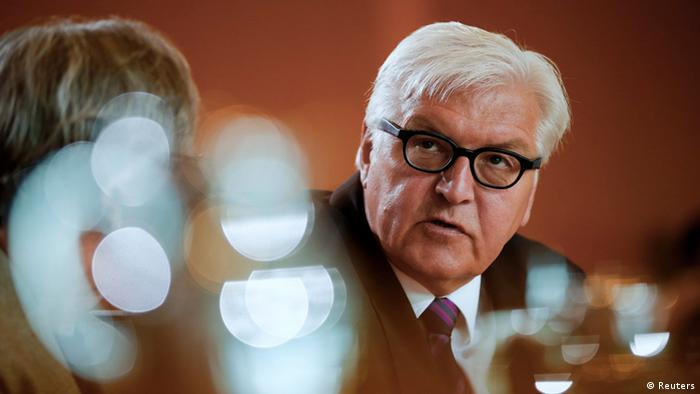 The German government has reached a consensus: refugees in northern Iraq threatened by the insurgents of the Islamic State (IS, formerly ISIS) need more assistance. German Foreign Minister Frank-Walter Steinmeier (Social Democrats - SPD) stressed that the government would go to the limit of what is politically and legally possible, given the dramatic situation unfolding in Iraq. But what exactly is the limit and could it evolve if the situation deteriorates?

On Thursday (14.08.20114), Steinmeier told public broadcaster ZDF he would not "currently exclude the possibility of exporting weapons if the threat level holds."

A military operation for the German armed forces in Iraq is not even up for debate for the government. A direct supply of weapons to the conflict zone is also not part of the plan at the moment. The government is currently considering what, beyond humanitarian assistance, can be done for the region "within the limits of what is legally feasible," a government spokesperson said on Wednesday.

Germany is currently coordinating a shipment of non-lethal military equipment to send to Iraq. "We are well on the way to delivering the supplies quickly," German Defense Minister Ursula von der Leyen (Christian Democrats - CDU) told public broadcaster ARD. The supplies include items such as tents, protective vests, and armored vehicles. In this way, Germany can "relieve other partners who are sending weapons," said von der Leyen. The United States has been supporting the Kurdish peshmerga militia since last week, supplying them with weapons and ammunition to fight the IS units. France has also announced that it will supply weapons to the Kurds. 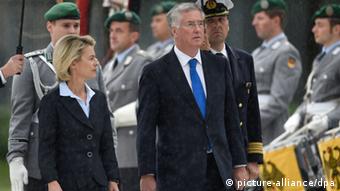 But is Germany even allowed to ship military equipment to crisis areas? "Legally, we are in a position to better equip the Iraqi army," said Economics Minister Sigmar Gabriel on Tuesday. The head of the Social Democrats cautioned against acting too hastily.

The decision is a political one. Until now, the basic principle has been that "Germany does not ship weapons to conflict zones." That's how Chancellor Angela Merkel put it last year when asked whether Germany should assist the moderate Syrian opposition in the fight against dictator Bashar al-Assad. This principle was fixed in the "Federal Arms Export Guidelines" passed by the SPD-Greens coalition in 2000, and recognized by the current governing coalition of CDU/CSU and SPD.

The guidelines don't rule out a shipment to northern Iraq, however. There is a passage that allows the export of weapons or other military equipment to conflict zones in individual cases when "particular foreign or security interests of the Federal Republic speak for permission to be granted as an exception." Is it a matter of interpretation? Government spokesman Steffen Seibert spoke of "leeway" when making this particular judgment call.

No to weapons, yes to military equipment

German politicians have been arguing for days over whether German weapons should be exported to Iraq. The fronts crisscross all the parliamentary groups. Even the most high profile member of the Left Party, Gregor Gysi, spoke out in favor of shipping German arms to the Kurds, even though he was met with fierce resistance from within his party. The Left Party has traditionally rejected all forms of arms exports.

According to the German government, there are purely pragmatic reasons for not sending German weapons to Iraq. A speaker for the Foreign Ministry pointed to the fact that Kurdish soldiers have access to weaponry from the United States or Russia. It seems only logical, then, to supply the peshmerga with "equipment that the fighters know how to use" – in other words, from these same countries. The Ministry of Defense said it was looking into "all options short of arms exports."

Decision not yet made

The decision about whether, and to what extent, Germany will deliver military equipment to northern Iraq has not yet officially been made, however. Currently, Germany is working together with its European partners and the United States, as well as the Iraqi government and the Kurdish autonomous region, to determine what supplies are needed and who will make them available. A meeting of EU foreign ministers is set for Friday to finalize plans. According to the Foreign Ministry, what's needed is a "coherent European action plan" so that each country contributes "in a way that is most sensible."

While the crisis in Iraq deepens, Europe has been slow to react - reluctant to be drawn into another quagmire in the region. However, more forceful action may be required, writes Julien Barnes-Dacey. (14.08.2014)

After years of trying to extricate the US from direct military engagement in the region, the carnage wreaked by IS fighters has propelled Obama to use force in Iraq. But why Iraq and not Syria, the group's stronghold? (13.08.2014)

Kurdish peshmerga militia are receiving modern weaponry to do battle with the extremist group "Islamic State." But the military aid is stirring fears of Kurds' aspirations for independence. (13.08.2014)