Germany to push for reform of UN Security Council

Foreign Minister Heiko Maas has said the council must include more permanent members to reflect today's world order. He also said Germany will not "shun its responsibility" for global conflict resolution. 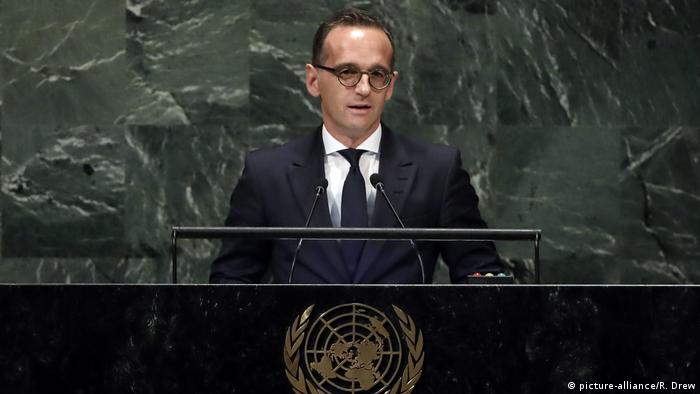 As Germany prepares to take up its seat next year as a non-permanent member of the UN Security Council, Foreign Minister Heiko Maas tweeted that "expectations with regards to Germany are higher than ever" and that Germany must be "utterly determined in advocating international cooperation."

In an interview with German news agency dpa, he stressed again that the UN's highest decision-making body, the Security Council, needs to be reformed to include more than the current five permanent members.

He says the current composition of the council was "outdated."

"I think the balance of power in the world needs to be reflected much more adequately than is currently the case," he told dpa, insisting that Germany should hold a permanent seat.

The UN Security Council currently has five members, the US, the UK, France, China and Russia. Germany, along with Brazil, Japan and India have been pushing for an expansion of the UN body for years.

Any reform would have to be approved by the five permanent members as well as two-thirds of UN members, most of which are against at least one of the aspiring countries' bids for a permanent seat.

Maas stressed that Germany's global "responsibility is growing" and that his country is prepared to take on a greater role in tackling global conflicts.

"With our [non-permanent] membership in the Security Council, we are getting even closer to the crises and conflicts – politically speaking."

Read more: Will the UN Security Council ever be reformed?

"We won't be able to shun big decisions anymore," he said, especially regarding conflicts in the Middle East, including those in Syria and Yemen.

Maas was more coy, however, about Germany's military involvement, insisting that the resources and the capacity of the country's armed forces, the Bundeswehr, should not be "stretched too far."

Germany starts its latest two-year stint on the UN Security Council on January 1.

International expectations are high after Germany's bid for a nonpermanent seat on the UN Security Council won overwhelming support earlier this year. But fulfilling them all could prove tricky. (25.09.2018)

Germany's UN ambassador has called on the world body to give women a bigger say in peace mediation. The call comes as the country prepares to take up a non-permanent seat on the Security Council. (21.12.2018)

Germany's foreign minister, Heiko Maas, has called on the United Nations to "stop beating around the bush" and start talks on reforming the Security Council. A push for change has been ongoing since the early 1990s. (28.09.2018)

US approves more weapons sales to Taiwan 2h ago

US, India to sign defense pact on sharing satellite data 3h ago