The attack on two men wearing kippahs — also known as yarmulkes — on a street in Berlin caused outrage in Germany. The suspect is in court on charges of hate speech and grievous bodily harm. 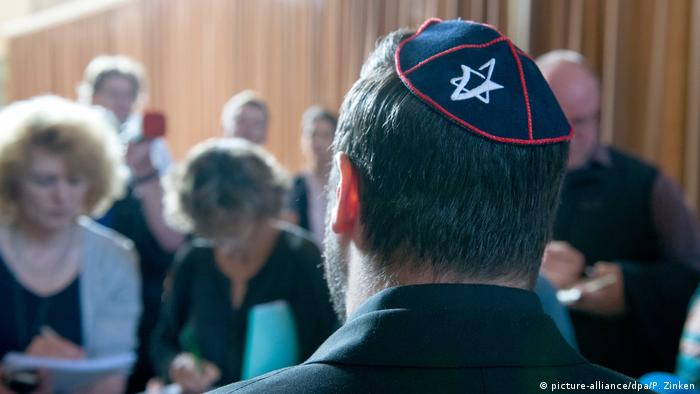 The attack, which was caught on video, took place in April in the Berlin district of Prenzlauer Berg. The disjointed images show three suspects, one of which hurled verbal abuse and struck one of the victims with his belt. The man also yelled the word "Jew" in Arabic. The attacker turned himself in to authorities days later.

The victims, one of whom shot the video, were not in fact Jewish. One of them, who identified himself as Adam, spoke to DW in April about the incident and explained that the kippah had been a gift from a friend who had told him it was "unsafe" to wear out in the open.

The 19-year-old Syrian admitted to the attack, but said he had been under the influence of marijuana and argued that the incident had nothing to do with anti-Semitism.

He told the judge at the Berlin Tiergarten court that the victim of the attack had insulted him first. Additionally, the defendant stated he had never hit anyone before, despite the fact that a criminal case against him in also underway in the German city of Cottbus for causing bodily harm.

The Syrian man said he was sorry and that the attack was a mistake. "I didn't want to hit him, I only wanted to scare him," he added. So far the accused, one of the two victims and an eyewitness have given evidence. Eight witnesses are participating in the trial, which was adjourned until Monday.

Under German law, the defendant, who is 19, is eligible to be tried as a juvenile. Whether he is tried as an adult or a juvenile will be up to the court. The charge of grievous bodily harm in Germany usually carries a jail term that can range from three months to five years. If deemed a juvenile, the defendant may receive a shorter sentence.

The incident has shocked people in Germany and around the world and raised alarm about growing anti-Semitism in Germany.

Thousands have rallied in the capital and elsewhere in Germany to express outrage at a spate of anti-Semitic incidents. DW's Jefferson Chase attended the Berlin event to see if it entailed anything more than symbolism. (25.04.2018)