Germany is set to close most shops from Wednesday as it tightens lockdown curbs, according to a draft government proposal. Chancellor Angela Merkel is to meet with federal and state leaders on Sunday morning. 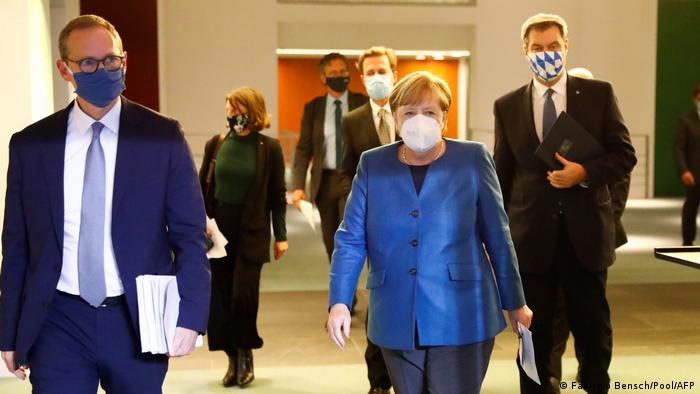 Germany is set to introduce a hard national lockdown on Wednesday, according to reports, as the country struggles to quell an exponential rise in coronavirus cases.

Under the plan, most stores will be ordered to close from December 16 to January 10 and that schools and day care centers would also be shut.

The decision will be a bitter blow to the nation's retailers, coming just nine days before Christmas, at the most profitable time of the year.

Companies will to be asked to be flexible with those parents who lack childcare cover due to closure of education centers, the proposal says.

For the Christmas holidays, from December 24 to 26, the draft paper calls for meetings of a maximum of 5 adults plus children aged up to 14, but no more than two households.

State and federal leaders are meeting for crisis talks on Sunday morning to formally decide which course of action to take.

"There have a lot of acrimonious exchanges in these meetings, they have often taken hours, as they have often had great difficulty agreeing on what measures should be taken. While Angela Merkel feels that the restrictions should be a lot more stringent, many regional leaders have, in recent months ... pushed for a more relaxed attitude. That has clearly not worked."

The priority is "that we now help to reduce contacts. Therefore, Germany must again accept many restrictions."

Scholz also called for a swift closure of retail and other non-essential services. "This has to happen very quickly now," he said.

The measures taken in the spring  helped reduce the incidence of infection, "but the virus is back," he said. The important thing now, he said, is to "act quickly and decisively," as it's "the only way to ensure that the virus can be controlled."

Baden-Württemberg State Premier Winfried Kretschmann  on Friday announced a nighttime curfew, and strict limits on movement during the day. Between the hours of 8 pm and 5 am, people are only able to leave their homes with a "good reason," such as going to work. The measures are set to be in place for four weeks.

Kretschmann, along with other leaders, has also called for a nationwide lockdown until January 10.

Söder: 'Our health system is overburdened'

Also on Friday, Saxony announced a hard lockdown, with schools, daycares and retail shops closed from Monday.  Additionally, residents must adhere to a curfew between 10 p.m. and 6 a.m.

The southern state of Bavaria, which has been one of the most heavily hit by the virus, was placed under a strict lockdown last week. Residents there are subject to a curfew from 9 p.m., as well as school and retail closures.

The state premier of North Rhine-Westphalia, Germany's most populous state, has also called for a hard lockdown ahead of Christmas.

Germany has been under a partial lockdown for the past six weeks, with bars, restaurants and other meeting points closed. However, the current measures have failed to sufficiently stem the rising rate  of infection in the country.

On Sunday, Germany's Robert Koch Institute for Infectious Diseases reported 20,200 new infections and 321 fatalities. The number is less than Friday's record of 29,875 cases. The country's intensive care unit capacity is also at a critical level, and doctors have warned that only five to 10% of intensive care beds are available in some parts of the country.

An intensive care doctor has warned that only five to 10% of intensive care beds are still available in parts of Germany. Meanwhile, 28,438 new cases have been reported over the past 24 hours. Follow DW for the latest.