Germany's Interior Ministry says that at least 950 hate crimes were committed against Muslims or mosques in the country in 2017, a newspaper has reported. Thirty-three people were injured in attacks. 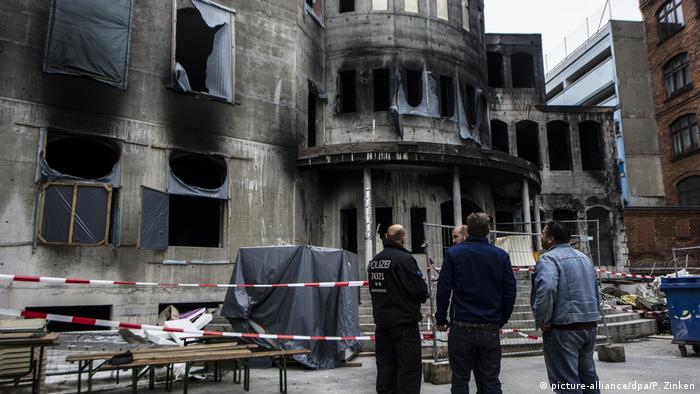 Anti-Muslim crimes, including physical assault, threatening letters, hate speech and spraying Nazi-themed graffiti on mosques, were rife in Germany in 2017, a newspaper reported on Saturday, citing statistics from the Interior Ministry.

The Neue Osnabrücker Zeitung newspaper said the ministry had recorded at least 950 such offenses, most of them carried out by right-wing extremists, with 33 people hurt in attacks.

Some 60 attacks and acts of desecration were committed against mosques and other Islamic institutions, the paper said. In some cases, pig's blood was smeared on buildings or Nazi symbols were sprayed on walls.

Around 90 demonstrations against the alleged "Islamization" of Germany were also included in the figures, which were provided to the Bundestag in response to a request by the Left Party. That number does not include marches by the anti-immigration group PEGIDA.

The number of offenses tailed off  toward the end of the year, with 167 crimes reported in the last quarter compared with 288 in the third.

No comparison could be made with the previous year, as German authorities did not start specifically recording anti-Islam crimes until the start of 2017. This mosque in Dresden was attacked with explosives

The chair of the Central Council of Muslims in Germany, Aiman Mazyek, told the newspaper that he was sure that the number of crimes was higher, saying there was not yet enough awareness on the part of police and prosecutors regarding anti-Muslim offenses.

The Left Party's expert for internal affairs, Ulla Jelpke, welcomed the recent reduction in the anti-Muslim crime rate, but said there was no reason to be complacent. She also warned that "Islam haters" had made it into the German parliament, in a reference to the anti-immigration Alternative for Germany (AfD) party, which currently holds 92 seats in the 709-seat assembly.

"The haters of Islam have now made the jump from the streets into the Bundestag and contribute to poisoning the social climate with regard to Muslim life in Germany from the parliamentary tribune," she said.

The populist Alternative for Germany (AfD) has overtaken the Social Democrats (SPD) in a national opinion poll for the first time. The news comes as the SPD begins a crucial vote on a coalition with Angela Merkel. (19.02.2018)