An 18th-century painting stolen by the Nazis for Adolf Hitler's private collection has been returned to Poland. Berlin hopes the move will assist talks over the recovery of historical documents it wants back from Warsaw. 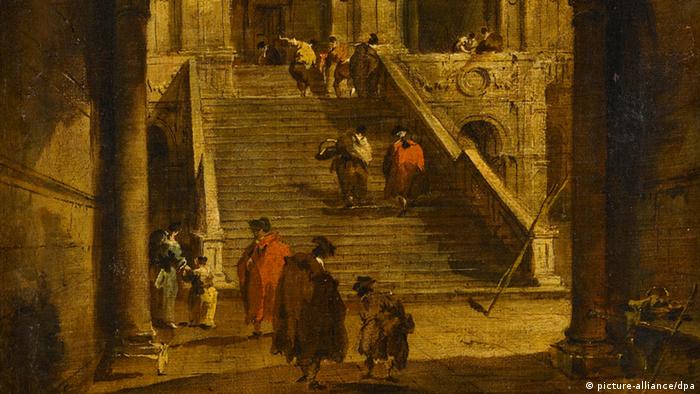 The painting "Palace Stairs" (pictured above) by Italian artist Francesco Guardi was removed from the National Museum in Warsaw in 1939 shortly after Germany invaded Poland. The small image features several noblemen conversing at the bottom of the stairs of Venice's Doge Palace.

The artwork was only formally recognized as belonging to Poland in the late 1990s - prior to that the piece was housed at the University of Heidelberg and then the State Gallery of Baden-Wurttemberg.

Returning the work of art to Poland was prevented by political differences between the two countries over the handling of art lost during World War Two.

"This painting has been on a long odyssey," German Foreign Minister Frank-Walter Steinmeier said at a ceremony Monday in the German capital where he handed the piece over to his Polish counterpart Radoslaw Sikorski.

"(It represents) the difficult history that connects our two countries," he added.

Steinmeier said Monday's ceremony "should also be a signal to restart the stalled German-Polish dialogue on cultural artifacts."

Germany is seeking the return of more than 300,000 drawings, manuscripts and books - known as the Berlinka collection - from Warsaw. Handwritten musical scores by Mozart, Beethoven and Bach are included in the collection now held by the Jagiellonian University in Krakow.

Poland is also seeking the return of thousands of looted artifacts taken from state museums and private collections during the Second World War, however it is believed many items were destroyed by the Nazis.

A reclusive heir, who hoarded priceless art that included pieces stolen by the Nazis from Jewish owners, has agreed to return the paintings to their rightful owners. More potentially looted artworks have now surfaced. (27.03.2014)

On the 75th anniversary of the alleged art burning, it's still unclear whether 5,000 works of 'degenerate art' fell victim to Nazi destruction in 1939. But a fake burning, say art historians, is highly unlikely. (20.03.2014)