Responding to an Amnesty International report on Israel's treatment of Palestinians, Germany's Foreign Ministry has said it rejects the term "apartheid," adding that it does not help solve the Middle East conflict. 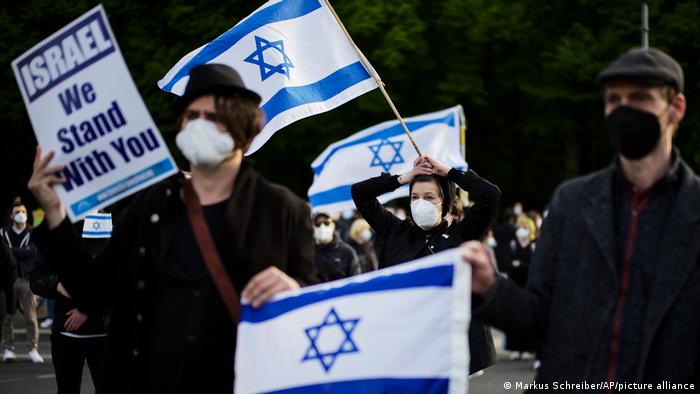 Germany is a staunch supporter of Israel, as seen during the May 2021 rally

Germany's Foreign Ministry gave a statement on Wednesday in connection with the report published on Tuesday by the human rights organization Amnesty International regarding Israel's treatment of Palestinians.

The Amnesty report accused Israel of subjecting Palestinians to a system of "apartheid" founded on policies of "segregation, dispossession and exclusion."

Germany, however, disagrees with the use of the term "apartheid" in reference to Israel, the Foreign Ministry said.

"We reject expressions like apartheid or a one-sided focusing of criticism on Israel. That is not helpful to solving the conflict in the Middle East," Foreign Ministry spokesperson Christopher Burger said at a press conference.

Burger added that the Foreign Ministry continued to oppose Israeli settlement in the occupied Palestinian territories and that Berlin remained in favor of a two-state solution in the Middle East conflict.

Israel accused Amnesty of pouring "fuel on the fire of antisemitism." Jewish groups in Germany also called the report antisemitic.

The president of the German-Israeli Society (DIG), Uwe Becker, demanded that Amnesty give back its Nobel Peace Prize.

"The outrageous claims that Amnesty International made in the so-called 'Israel report' that it published today, expose the organization as definitively and undoubtedly antisemitic," he said, according to a tweet on Wednesday from the DIG.

Germany is one of Israel's staunchest supporters and has pursued a special relationship with the country as well as with pro-Israeli Jewish groups in Germany.

The Central Council of Jews in Germany labeled Amnesty's report "antisemitic" and called on Amnesty International's German chapter to distance itself from it.

Amnesty International Germany published the report on its website but noted that, in the current climate and historical context, an "objective, factual debate" on the report is difficult to achieve — and said it would not organize any activities around the publication to deter "misinterpretations of the report."

On Wednesday, the report was no longer prominently placed on the Amnesty Germany website, despite being at the top of the Amnesty International page.

Amnesty International's secretary general, Agnes Callamard, rejected the claims of antisemitism on Tuesday as "baseless attacks" that are "nothing more than a desperate attempt to evade scrutiny."

She also emphasized that "Amnesty recognizes the state of Israel and denounces antisemitism."