Zoo officials in the eastern German city of Halle (Saale) announced Sunday that a red panda cub was born in a protected litter box earlier this month. The unnamed cub is being looked after by his mother Cherry. 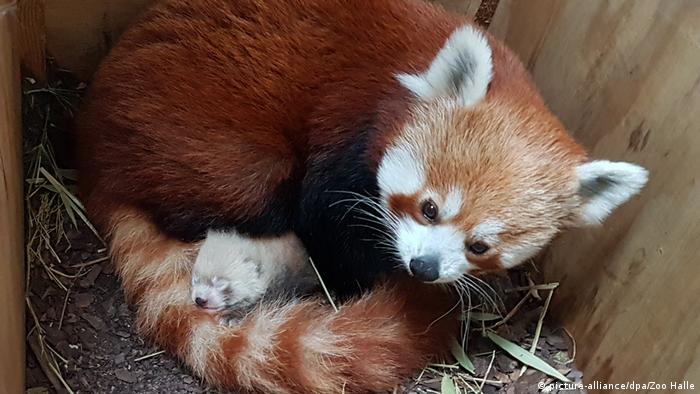 A zoo in eastern Germany has announced the birth of a red panda on Sunday. The cub was born on June 19 and is in good health, zoo officials said.

The Bergzoo officials in Halle (Saale) said that the cub has reddish-brown fur and a long striped tail.

The unnamed cub is currently being looked after by his mother – 3-year-old Cherry – and his father – 4-year-old Pang, who came to the zoo in 2016.

Read more: Berlin and beyond: Zootopia to zoomania

The small panda is native to the Himalayan region and southwestern China. Its population has been in decline in the past decades due to habitat loss and poaching. The International Union for the Conservation of Nature (IUCN) listed red pandas as an endangered species, with an estimated population of 10,000 worldwide. About 50 of them are born in European zoos each year.

Small in size, solitary in nature

Red pandas don't share many physical features with their giant monochrome namesakes, and their appearance is more likely to be compared to that of a raccoon or a cat.

Red pandas tend to be solitary animals except during the breeding season, which starts in the late fall. After a four-month gestation period, the female typically gives birth to between one and four young — paler versions of herself. During their first days in the nest, the cubs have her undivided attention. At 3 months, they change color and begin nibbling on bamboo.

The bears are considered to be the national animal of China. Their awarding is an important diplomatic gesture and a good deal. So that it works better with the panda offspring, the animals should get more space. (08.03.2018)