Unemployment is at a historic low in Germany, but millions of people aren't earning enough to pay their bills or adequately heat their homes. The latest EU figures show poverty poses a greater risk to women. 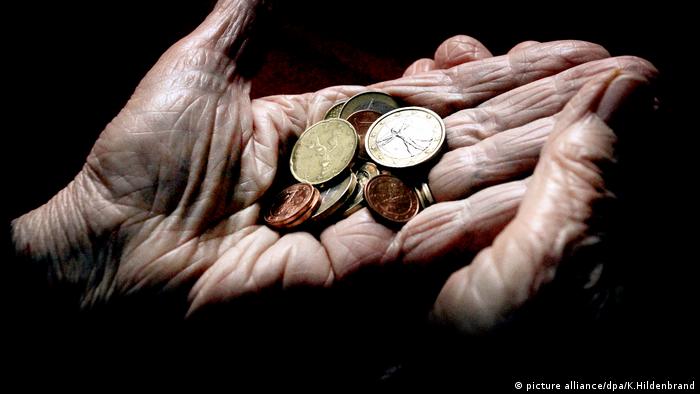 Almost one in five people in Germany was threatened by poverty or other forms of social exclusion in 2017, Germany's Federal Statistics Office reported on Wednesday, citing data from a European Union study.

Some 15.5 million people were at risk, which amounts to 19 percent of the population, the study found.

The figure is down slightly from the previous year, which found that 19.7 percent were threatened by poverty. Women across all age groups were found to be particularly at risk compared to men.

Germany's results are still lower than the EU average, which was 22.5 percent. The figures are particularly concerning as Germany has some of the lowest food and energy costs in the bloc and is experiencing a historically low unemployment rate.

More people may be at work in Germany than ever before, but the results of the study suggest that many aren't being paid enough to keep them above the poverty line.

The EU study defines people on the brink of poverty as those who earn less than 60 percent of Germany's median national income, those who suffer severe material deprivation at home, or those who live in homes with very low labor force participation.

Some 16.1 percent of people were found to be threatened by poverty due to their low monthly income. The income threshold for singles was €1,096 ($1,243) per month and €2,302 for households with two adults and two children younger than 14.

Another 3.4 percent of the population met the EU standard for severe material deprivation at home, meaning they struggled to pay their rent on time, heat their homes adequately, were not able to regularly eat a substantial meal, or spent vacation time at home because it was financially unfeasible to go somewhere else.

The number of people younger than 60 living in households with low labor force participation was 8.7 percent in 2017, dropping slightly from the previous year.

Verena Bentele, the president of the social welfare association VdK Germany, said the results of the EU study were "scandalous," particularly in light of the country's current "economic boom."

She urged for a new, comprehensive plan to combat poverty in Germany.

"That should include fair educational opportunities as well as a new strategy for labor market policy," Bentele said in a statement.