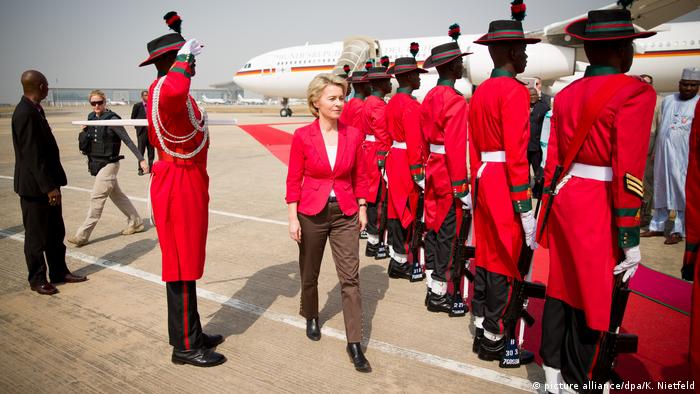 During a visit to Nigeria on Sunday, German Defense Minister Ursula von der Leyen announced that Berlin will give 4.2 million euros ($4.4 million) worth of equipment to support the West African nation's fight against terrorism.

Germany is set to supply Nigeria with three radar stations, 180 mine detectors and a mobile field clinic to help combat the militant Boko Haram group.

Von der Leyen said the support was also part of a larger initiative to stem flows of migrants from Africa to Europe.

"Of course, many people also leave Nigeria to flee from terror," von der Leyen said in the Nigerian capital, Abuja, on Sunday.

"In this sense, it is in our common interest that terror is being fought," she added.

Support for stability and security

The support to Nigeria is also part of Germany's policy of encouraging partner countries in crisis regions to achieve stability and security. Germany has allocated 230 million euros ($240 million) towards this goal in 2016 and 2017 in Jordan, Tunisia, Nigeria, Niger and Mali.

Boko Haram has been waging an insurgency to impose a hard-line Islamic legal system on Nigeria's mainly Muslim north since 2009. An estimated 20,000 people have been killed, while another 2.6 million have been displaced.

Von der Leyen's West African tour was stalled on Sunday after her airplane experienced computer problems and had to remain in Abuja for the night. On Monday, she is set to visit with German soldiers stationed in Mali on a training mission.

How music can help rebuild Nigeria

In northern Nigeria, the terrorist group Boko Haram is destroying musical traditions. But old recordings in the archive of the Center for World Music in Germany can help in the rebuilding of Nigerian society. (13.12.2016)

In northwestern Nigeria, a lethal conflict between the authorities and the outlawed Islamist group IMN continues one year after hundreds were killed in clashes. The group refuses to register as a religious movement. (14.12.2016)