Germany: Neo-Nazi politician to be voted out of post after outcry

The news spread like wildfire across Germany: a far-right extremist politician was elected to a local post by representatives of mainstream parties. After days of outrage, the council now says it wants to undo the vote. Just days after being elected the head of a local authority in central Germany, a member of the right-wing extremist National Democratic Party (NPD) may not take up his post after all.

The local council in the village of Altenstadt-Waldsiedlung in the state of Hesse moved to annul the vote on Monday.

The village made headlines in Germany after the council unanimously elected NPD politician Stefan Jagsch to a district leader post last Thursday.

The NPD, an ultra-right party with neo-Nazi ties, has been classed as "anti-constitutional" by Germany's highest court and long been viewed as taboo for Germany's mainstream parties.

But the council that elected Jagsch was comprised of representatives of German Chancellor Angela Merkel's Christian Democrats (CDU), the center-left Social Democrats (SPD) and the business-friendly Free Democrats (FDP).

Council members defended their decision by saying there were no other candidates for the post.

'A serious mistake was made'

Seven of the nine members of the local council signed off on a motion to remove Jagsch from the council, said Lucia Puttrich, who heads the CDU branch of the region in which the village is located.

"Yes, a serious mistake was made — but it has been recognized and it is also being corrected accordingly," Puttrich told local public broadcaster Hessischer Rundfunk.

Only a two-thirds majority on the council is needed to force Jagsch out of office, but it is still not clear when he would be asked to leave.

The NPD politician already said he would not go willingly. Jagsch told news agency DPA that he would have the legality of council's motion examined.

Jagsch's election sparked outrage across Germany and horrified reactions from federal politicians who voiced disbelief that their own party members unanimously signed off on his election to the local position.

CDU party leader Annegret Kramp-Karrenbauer had called for the vote to be reversed, saying that "horror and indignation" about his election were "completely justified."

Kathrin Anders, a state lawmaker with the Greens, urged more people to become active in local politics to prevent such situations in the future.

"In a democracy, personnel shortages cannot be an argument for electing a neo-Nazi," she said. 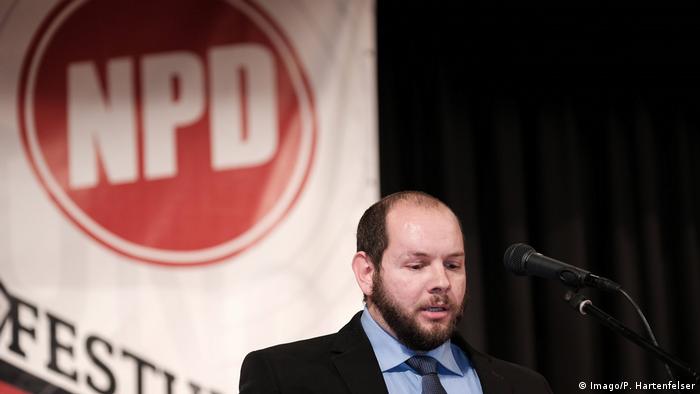 Jagsch posted a picture on his Facebook page posing with a sign that reads: "They say migration and they mean genocide"

Not all on the local council appeared to regret their decision.

CDU representative and council member Norbert Szielasko described Jagsch as "absolutely collegial and calm" and said that "party membership doesn't play a role for us."

The NPD is known for its vehement anti-migrant stance. On his Facebook page, Jagsch has an image of him next to a sign that reads: "They say migration and they mean genocide."

Germany's Constitutional Court said in 2017 that the NPD was "similar in character" to Adolf Hitler's Nazi party.

The court, however, ruled against banning the party because it said the NPD was too weak to endanger democracy.