Several Afghan migrants were found after they jumped out of truck carrying tree trunks. The driver was completely unaware that the men were in the truck until he stopped just across the German border. 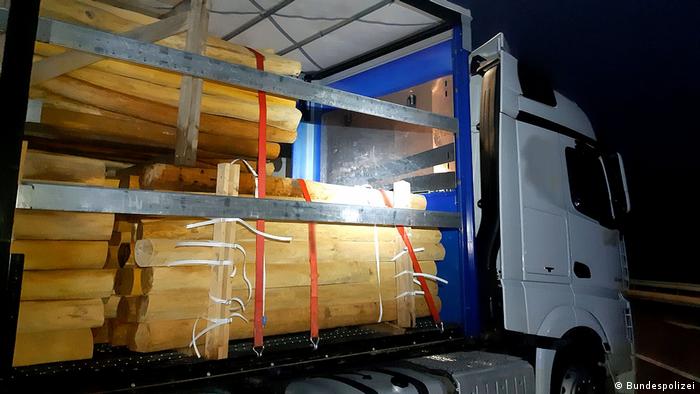 Five Afghan migrants were detained in southeast Germany after they smuggled themselves across the border in a large truck that was carrying tree trunks from Romania, police said in a statement on Friday.

According to the police statement, the incident took place on Thursday afternoon when the truck driver noticed his truck was shaking, prompting him to pull over at a rest stop at the Samerberg Nord freeway station near the Bavarian town of Rosenheim.

After checking to see whether the 24-ton cargo might have slipped, several people jumped out of the truck and scattered.

Authorities were later able to locate the group — which included four men aged between 19 and 38, as well as a 16-year-old boy. None of them carried any identification.

They were questioned by federal police in Rosenheim with the help of translators and later taken to a refugee assistance group.

The truck driver was also questioned by police, but he was let go after authorities determined he did not know about the men in the truck until they jumped out.

According to police, the driver started out on the over 1,000 kilometer (621 mile) journey from Romania to Germany on Tuesday.

They traveled partly on foot and partly by car, independent of one another, and eventually arrived in Romania. They spent two days hidden between the tree trunks on the truck before making it to Germany.

There have been similar incidents in southeastern Germany in recent weeks. Due to the latest incident, police have said they will carry out more checks on trucks in the area to check for other potential smuggling cases.