Ten people were injured, including five children, when lightning struck a family celebration in the German state of Saxony-Anhalt. Some of the partygoers had been holding onto metal tent polls when the lightning hit. 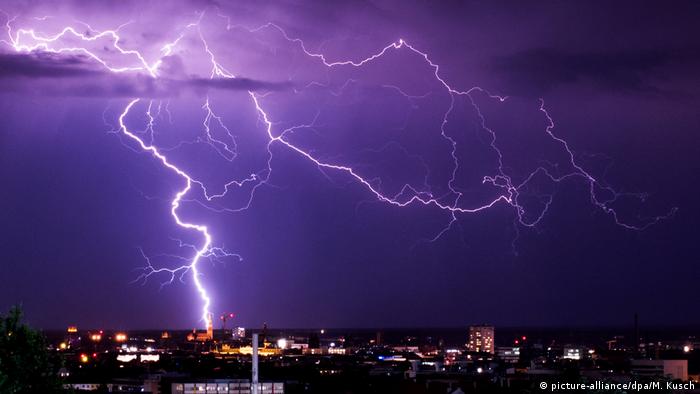 Ten people were injured in the German state of Saxony-Anhalt on Saturday evening when lightning struck the roof of a barn where a family party was taking place.

Around 40 people attended the party in the village of Neuferchau, located around 30 kilometers (19 miles) outside of Wolfsburg. They were reportedly celebrating a birthday and a baptism.

Five children were playing in the barn at the time the lightning hit and suffered burns.

Another five adults sheltering in a tent near the barn were also injured. According to police, they were holding on to the metal poles and other metallic parts of the tent when the lightning struck.

One adult was taken to a clinic in Wolfsburg with more serious injuries that were likely due to electric shock, local public broadcaster MDR reported. The rest suffered from circulatory issues and muscle pain.

None of the partygoers sustained life-threatening injuries, emergency services said.

Powerful thunderstorms on Saturday brought cooler temperatures and much-needed rain to regions of Germany, which has been suffering under an ongoing heatwave, but they also brought dangerous lightning and wind.

Trump to remove Sudan from US terror blacklist 35m ago

Brexit: EU and UK urge compromise to save talks 6h ago