Germany: Income inequality 'too great' say 9 out of 10 people

Only one other EU country ranks higher according to the percentage of people who think income differences have grown too far. A majority of respondents in Germany also think they live in a country of equal opportunities. 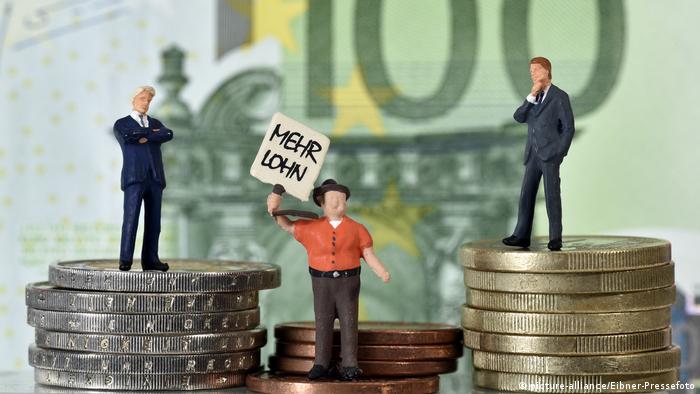 A figure holds up a sign inscribed with the phrase: "Higher wage"

An overwhelming majority of people in Germany think that income inequality is "too great," according to an EU report published on Monday.

The Eurobarometer report, which polled people in all 28 EU countries, found that only Portugal had a higher proportion of respondents who thought income disparities had grown too much.

Why this matters: The results have come amid concerns about the widening gap between rich and poor in many developed countries, including Germany and other European countries. Some economists have said the gap harms growth, while others have taken a more skeptical view.

Majority want to tackle inequality: The Eurobarometer report also found that 74 percent of respondents in Germany agreed that "the government … should take measures to reduce differences in income levels." People in Portugal agreed the most (94 percent), while people in Denmark agreed the least (51 percent). The EU-wide average was 81 percent.