Is inequality good or bad for the economy? | Business | Economy and finance news from a German perspective | DW | 16.04.2018

Is inequality good or bad for the economy?

The gap between the rich and the poor has been widening in most countries. Economists are analyzing the potential consequences, among them pundits at the IMF which is holding its spring meeting in Washington this week. 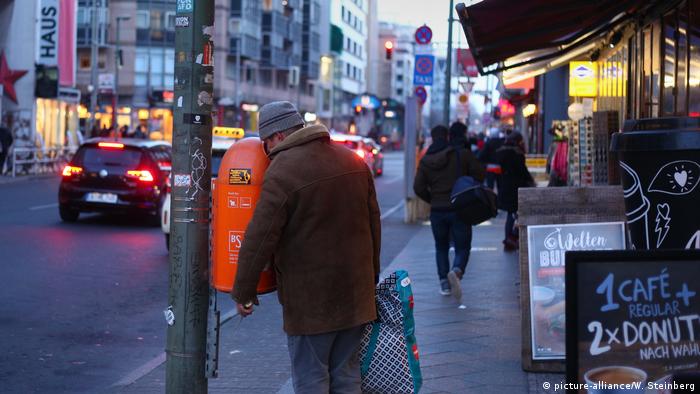 Economists don't have a reputation for being compassionate. They focus on numbers, not human fortune. Most have no problem with wealth or income inequality. Quite the contrary: People work harder if they want to move up. Redistribution of wealth and social programs are costly and dampen motivation, the argument goes.

But for some years now, there have been signs of a change of heart. The International Monetary Fund (IMF), not exactly known for leftist leanings, is now warning that inequality is hurting growth. The OECD, a club of mostly rich countries, agrees.

"When income inequality rises, economic growth falls," writes Federico Cingano in his study for the OECD. Researchers at the IMF came to similar conclusions: "If the income share of the top 20 percent (the rich) increases, then GDP growth actually declines over the medium term."

For OECD countries, the loss in growth had amounted to a whopping 8.5 percent of GDP over the last 25 years, the study found. For Germany, Berlin-based research institute DIW calculated a yearly loss of €40 billion ($49.5 billion), in a study commissioned by the Friedrich Ebert Foundation, which is affiliated to the Social Democratic Party.

The findings pleased those in favor of redistribution of wealth, welfare programs and higher taxes for the rich. Finally, it seemed, there was scientific proof that the fight against inequality was a worthy cause — not just for moral or political, but also financial reasons.

Too good to be true

"If that was true, all rational people would have to be in favor of redistribution of wealth," Holger Stichnoth tells DW. He's the head of distribution studies at the Center for European Economic Research (ZEW) in Mannheim. "But this is too good to be true."

Stichnoth says the studies failed to prove a causal relationship between inequality and lower growth. Other economists had similar qualms, criticized the studies' methodology and use of data, and came up with different results.

"It's still unclear whether the link [between inequality and growth] is positive, negative or not there at all," says Stichnoth.

"That's the dilemma of the social sciences," he adds. "It's just very hard to prove a causal relationship."

Researchers at the IMF recently published new findings, trying to determine the exact point where inequality starts to hurt growth. The debate is not over yet. 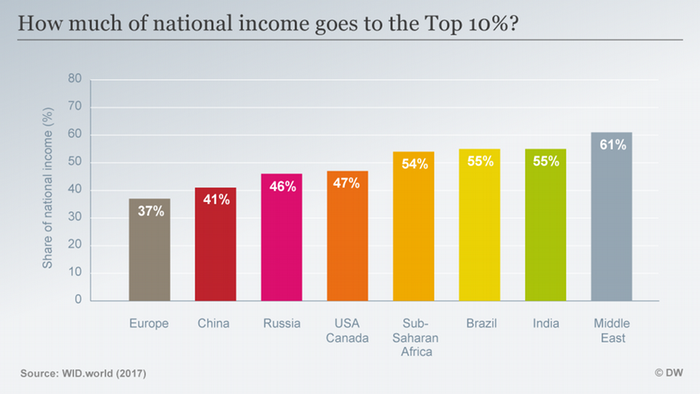 Economists do agree on some points, though. For example that low-income families are able to invest less in education, thus reducing their chances to find well-paying jobs.

There's also no contesting the fact that income inequality is on the rise. The IMF calls this "the defining challenge of our time." According to the OECD, "the gap between rich and poor is at its highest level in 30 years" in most of its 35 member countries.

So, does it all boil down to the old adage that the rich get richer while the poor stay poor? Not quite, argues distribution analyst Holger Stichnoth. "Some countries which used to be very poor have caught up massively in the last 30 years."

While inequality within China or India is huge, the gap between these countries and Europe or the US is narrower than it used to be. Viewed this way, global inequality has been reduced. 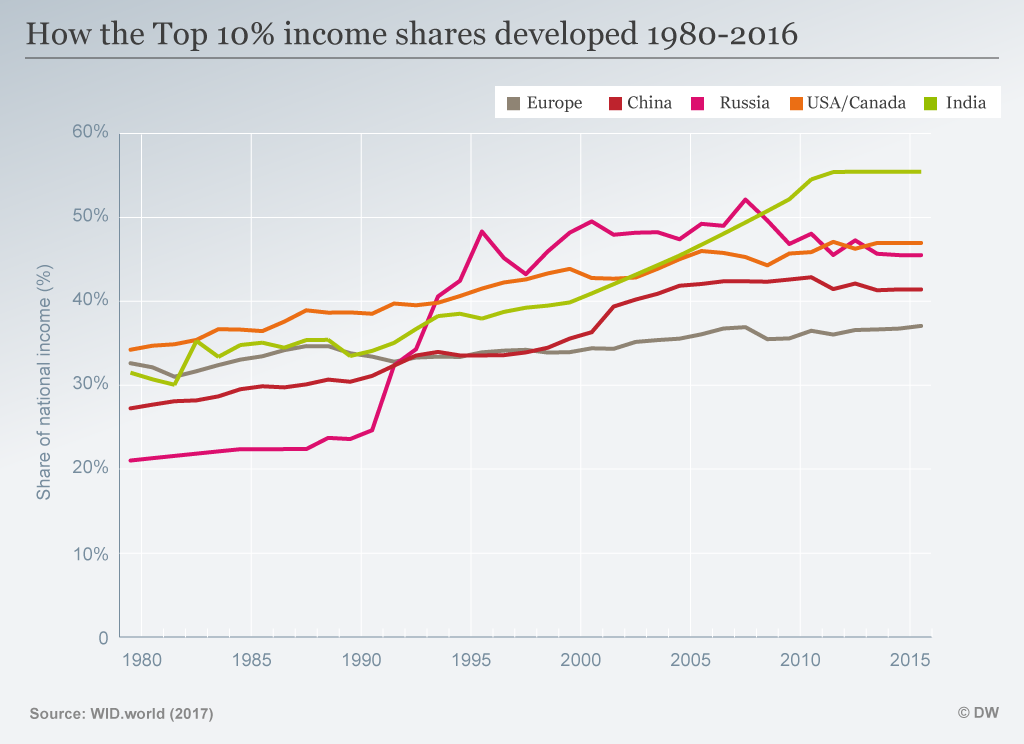 One way to measure that is the Gini index. In theory, a Gini of zero means that everybody has exactly the same income, and a Gini of 100 that one person gets it all. The global Gini index has now dropped to 65, a study by the Peterson Institute for International Economics showed, thanks to fast-paced economic development in many mostly Asian countries. The researchers expect the Gini to drop further and reach 61 by 2035.

But even then, the global Gini would be far higher than it is today within individual countries like Germany(29), the US (39), or China (47). The world as a whole, it seems, is more unjust than nation states.

The lower half of the world's population has seen their incomes rise significantly in the past decades. "But this is little consolation for those who do not benefit from this development," said Stichnoth. This includes Europeans and Americanswith low or middle incomes. Viewed globally, they might be considered rich, but their incomes have stagnated, according to the World Inequality Report, or even shrunk, according to other studies.

High but falling global inequality, and a widening gap between rich and poor within countries — all of these trends might help explain the rise in populism, nationalism and protectionism in many places today. 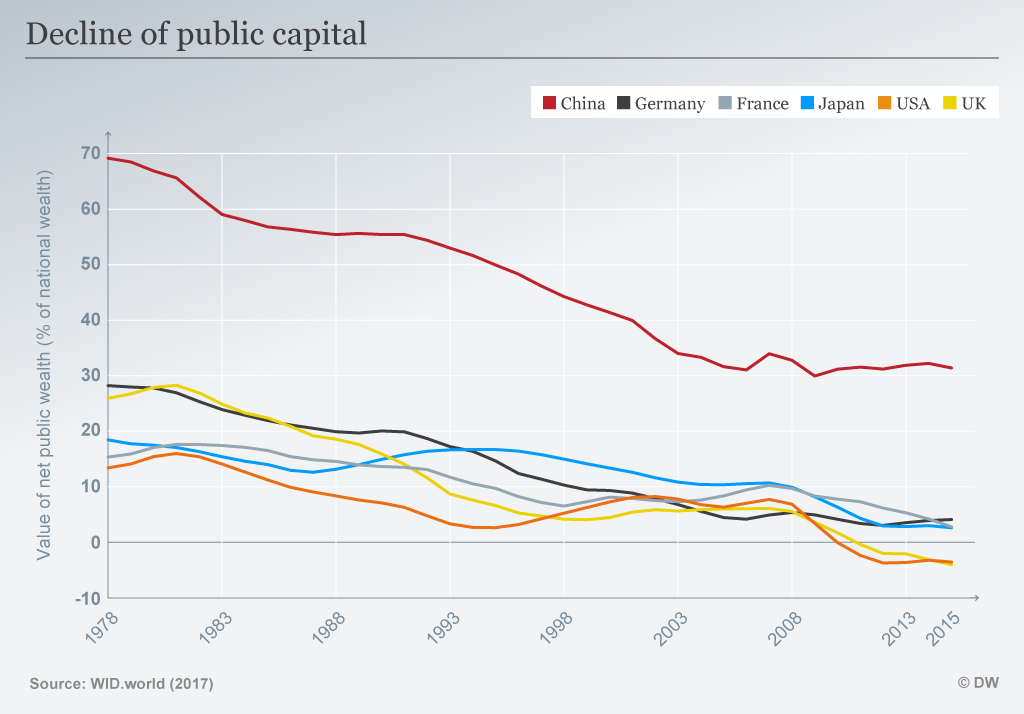 It's unclear if governments can reverse this trend, because they often lack the resources.

"Nearly all countries" have privatized large parts of publicly-held assets over the past decades.

Oxfam: Richest one percent banked 82 percent of wealth created in 2017

Oxfam's latest report on wealth inequality describes how a wealthy elite accumulates vast fortunes while the poorest go without. But the charity has been criticized as offering a too simplistic view of the imbalances. (22.01.2018)

Income inequality can lead to "catastrophes," but there are ways to fight it, according to the World Inequality Report. "Everything depends on the choices that will be made," says renowned economist Thomas Piketty. (14.12.2017)