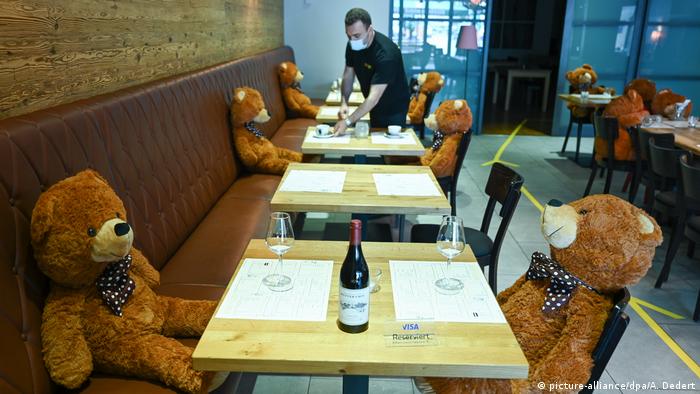 While the German government has announced on Tuesday that social distancing measures will apply until June 29, a broad spectrum of cultural institutions in the country are already finding unique ways to maintain a 1.5-meter distance between people from different households.

In the university city of Münster in western Germany, a socially-distanced rave already took place on May 21, with patrons dancing within circles drawn 1.5 meters apart.

The party at the Coconut Beach club in Münster featured a line-up of DJs who were secure behind the decks that were surrounded by plexiglass. The capacity was cut from 2,000 to 100, and even though tickets cost a premium €70 ($77), they were sold out within 15 minutes. As party people let loose after a seemingly interminable lockdown, they still faced a number of restrictions. Only groups of four were able to hang at designated areas around the bar.

Renowned house music DJ Gerd Janson, who took an 80% pay cut to play, told club culture website Resident Advisor that the night was about showing "how to make things possible again … it went really well: a bittersweet mixture of nostalgia and hope."

Such a drastic cut in patron numbers will be a reality for most major cultural institutions, at least in the short to medium-term. The legendary Berliner Ensemble theater, established by Bertolt Brecht after the war, tweeted an image of the "new reality" in its main house from next season. The space between guests is rather eerie; but at least the show can finally go on.

The Dresden Palais Sommer, one of Germany's major summer festivals, announced that it would be going ahead with its program of over 100 events from July 17 to August 23. Organizers are expecting up to 1,000 visitors per concert; inspired by similar setups in US parks, circles will be drawn in the park in front of the Japanese Palace, the festival's main venue, to ensure that guests keep a safe distance to each other. In terms of culinary culture, one restaurateur has got creative with his spare seats, meaning distanced guests won't be sitting next to empty space but teddy bears. The Beef'n Beer restaurant in Hofheim in the state of Hesse has utilized the cuddly toys (see top image) as a much friendlier alternative to barrier markers or plexiglass.

Such gimmicks were happening back in mid-May when restaurants reopened in the city of Schwerin in northern Germany. At Konditorei Café Rothe, pool noodle hats were handed out to guests on a sunny day to enforce social distancing measures. Social media was abuzz, with one Twitter user warming the US what is to come.

A similar headgear distancing concept was dreamed up by Burger King in Germany. The new cardboard crowns are designed to keep customers nearly two meters apart and are being rolled out across the nation for fast food junkies in need of a fix.

While drive-in cinemas and mobile cinema carparks have been booming since the coronavirus hit, with concerts, theater performances and even a tractor disco being enjoyed from virus-proof vehicles, religious observance is also getting in on the act.

In the city of Wetzlar near Frankfurt, IKEA agreed to give a local mosque access to its vast carpark so that devotees could pray at a safe distance. The image of the outdoor prayers has gone viral, with many praising the broader community solidarity, including from the police, that has allowed the prayers to take place.

Meanwhile, a Berlin church has welcomed Muslims worshippers from a nearby mosque in Neukölln to conduct their Friday prayers due to a lack of adequately distanced space.

It was another positive note to emerge from the coronavirus pandemic as cultural life in Germany gradually reawakens.

Muslims around the world have began celebrating Eid al-Fitr, a normally festive holiday, spoilt by stay-at-home orders and fears of fresh coronavirus outbreaks. DW looks at how countries have altered their plans. (24.05.2020)

The German Hotels and Restaurants Association has criticized new rules requiring a negative test or booster shots for diners. Meanwhile, South Africa is urging its citizens to get vaccinated. Follow DW for the latest.

The centuries-old Oberammergau Passion Play is back 13.05.2022