Berlin has failed to meet the deadline for complying with the EU's guidelines on data retention. Brussels has threatened legal action against Germany. 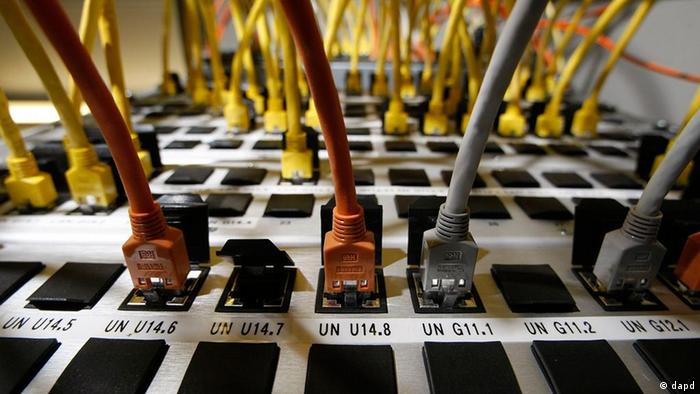 Germany faced a possible lawsuit from the European Court of Justice on Friday, after Chancellor Angela Merkel's center-right coalition failed to meet a deadline to comply with European Union guidelines regarding the retention of telecommunications data.

Brussels had given Berlin until midnight Thursday to implement EU guidelines into German national law. The EU has called for telecommunications data to be retained across the board and without cause for up to six months in order to fight crime and terrorism. This includes connection data for telephone calls, Internet usage, emails and text messages.

"Germany has had many years. If it does not give in, then it will face a legal process for violating EU treaties," EU Justice Minister Cecilia Malmström said on Thursday.

Although the Germany passed a law in 2008 to implement the EU rules, the Federal Constitutional Court struck down the legislation as unconstitutional. Berlin has been seeking to patch together a compromise law since then.

Germany has been unable to meet EU guidelines due to a disagreement within Merkel's coalition. The chancellor's Christian Democrats (CDU) and their Bavarian sister party, the Christian Social Union (CSU), support complying with the EU's rules. The market-friendly Free Democrats, the junior member of the coalition, have opposed the guidelines as an infringement on civil liberties.

"Privacy is an issue of freedom": Democracy in a digital society

Former German Interior Minister Gerhart Baum talks to DW about the benefits and risks of a digital society and its effect on democracy. We should have the "courage" to go for more direct democracy, he says. (16.04.2012)

But Schnarrenberger said that the EU guidelines were controversial among several member states.

"The guidelines have been in place for five years and have not been implemented in many countries," the justice minister told the local daily Passauer Neuen Presse.

The Free Democrats have expressed support for retaining data in specific instances where suspicion exists, but continue to reject measures that go further.

Friedrich sought to play down the significance of Berlin's inability to find a compromise, saying that the coalition still had time to find a way out of its impasse.

"Sometimes you need more time," the interior minister said. "We are on the right track."

If Germany is brought before the European Court and found guilty of violating the EU treaties, it would have to pay a fine of millions of euros.

The opposition, center-left Social Democrats criticized the coalition for its inability to resolve the dispute. SPD parliamentary chief Christine Lambrecht said it was "irresponsible" for the coalition to carry out its dispute "on the backs of taxpayers."