The first flight chartered by the German government to bring evacuees to Germany has landed in Frankfurt. Further flights are planned to transport more people. 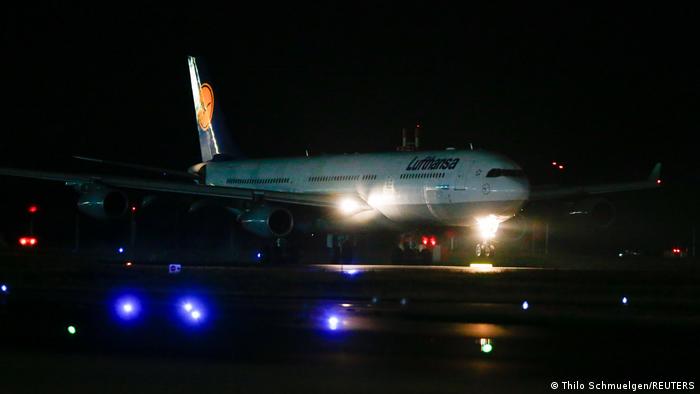 A plane chartered by the German government to bring people evacuated from Afghanistan to Germany landed in the city of Frankfurt early on Wednesday morning.

Some 131 people who had been evacuated by German military planes from Kabul airport to the Uzbek capital of Tashkent arrived in Germany several hours after leaving Afghanistan.

The German airline Lufthansa put on special flights to fly evacuees from Tashkent. It said it would carry out more such flights in the next few days "in the framework of an air bridge and in agreement with the German government."

Flights were also scheduled to leave from the Qatari capital Doha as well as other neighboring countries.

Over 250 evacuated from Kabul

Plans for the flight were laid out in a matter of hours. "Traffic rights were applied for at short notice, crew deployment planning was carried out and the aircraft was cleared for deployment," Lufthansa said.

An earlier flight on Tuesday had brought the first personnel evacuated from the German embassy in Afghanistan. They landed at Berlin's Schönefeld airport.

A third military A400M transport aircraft left Kabul late on Tuesday, bringing another 139 people to Tashkent. More than 260 people have been evacuated from Afghanistan by the German army so far.

The German government came under heavy criticism after the first evacuation mission left Kabul with just seven people on board on Monday.

Germany has been scrambling to react to the fall of Kabul and most of Afghanistan to ultraconservative Taliban insurgents on Sunday.

The rapid takeover by the militants caught many people by surprise, leading to chaotic scenes at Kabul's Hamid Karzai International Airport. Desperate crowds swarmed onto the tarmac in the hope of escaping the country.

One US plane took off with over 600 people on board. German military aircraft prevented from landing, however, until security forces were able to clear the runway again.

Germany is one of several countries trying to evacuate its citizens as well as locals who worked with its military face possible persecution by the Taliban.

Berlin has been criticized for failing to help Afghan staff earlier.

The plane carrying 26 people landed at an Australian base in the United Arab Emirates, he said.

Morrison said rescue flights would go on "for as long as we can continue to operate the flights to get people out."

"This is not a simple process," he said.

But Human Rights Watch criticized the Australian government for the slow pace at which it was evacuating those who need protection.

"Now is not the time to send partially-filled planes out of Kabul when so many Afghans are at risk and can't leave," said Elaine Pearson, the group's Australia director.

Pearson urged Australia to carry out any security vetting in a safe third country, rather than try and complete the process on the ground in Afghanistan.

Australia said on Monday it would send 250 military personnel to Kabul to evacuate its citizens and an unspecified number of Afghans who had been given visas after working for Australia.

A Western security official, quoted by the Reuters news agency, said more than 2,200 diplomats and civilians have been evacuated since the Taliban seized control of the Afghan capital earlier this week.

Australia to close Kabul embassy after US troop withdraw

Australian PM Scott Morrison said the embassy would be shut in three days amid rising security fears. The embassy will reestablished "once circumstances permit."