Germany distributes COVID-19 vaccine to states ahead of rollout

The first doses of the BioNTech-Pfizer coronavirus vaccine have been delivered to Germany's 16 states. Along with other EU countries, Germany is set to officially kick off its vaccination program on Sunday. 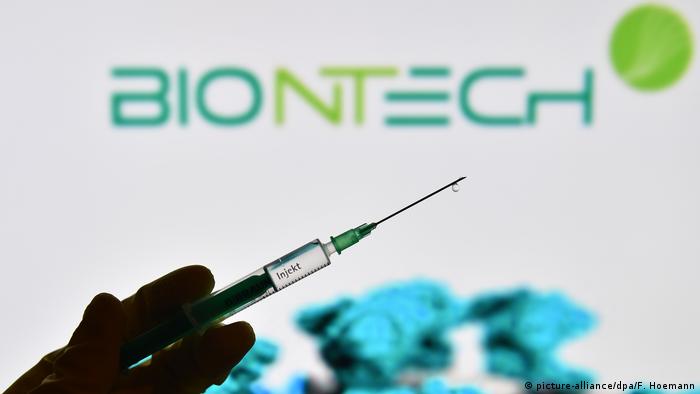 The first doses of the BioNTech-Pfizer coronavirus vaccine have arrived in Germany's 16 states, the dpa news agency has reported, as the European Union gears up to begin a large-scale immunization program.

Tens of thousands of initial doses were set to be delivered from BioNTech, a Mainz-based pharmaceutical firm, to 27 locations nationwide.

The doses would then be distributed to vaccine centers and mobile teams, which will begin the first vaccinations on Sunday. The vaccine doses, small vials delivered in two special thermal boxes, need to be kept at a temperature of minus 70 degrees Celsius (minus 94 degrees Fahrenheit).

"The vaccination centers are ready to go. The vaccination teams are in place," German Health Minister Jens Spahn told a press conference in Berlin on Saturday.

BioNTech developed one of the first coronavirus vaccines with US-based firm Pfizer. The European Union, which approved the vaccine earlier this week, has secured more than 300 million vaccine doses from the two companies.

Why is Germany waiting to start vaccinating?

While Germany finalizes its preparations, countries like the United States and the United Kingdom have already begun vaccination programs. The European Union wanted to make the vaccine available to all member states at the same time, as a sign of unity.

"Europeans, including Germany, opted to have the European agency give the green light for the whole of the EU to be able to use it," said Michaela Küffner, DW's chief political editor.

"This slowed down the process. It would have been faster if individual states had put that on a fast track, but they didn't because they also wanted to send the 'European united' signal."

This sign of unity was stressed by European Commission President Ursula von der Leyen in a video message posted to her Twitter account on Saturday. She said the vaccine will "help us get our normal lives back, gradually."

Who will receive the vaccine first?

The vaccine will be made available to German residents aged over 80 first, as well as caregivers and hospital staff at particular risk.

Between 11 to 12 million doses of the vaccine are expected to be available by March. That would be enough to vaccinate 5.5 to 6 million people, since the vaccine needs to be administered twice.

Spahn hopes to be able to make vaccinations available to all residents by the summer, though other preparations need to be approved for that to happen.

Almost two-thirds of Germans have shown a willingness to get vaccinated against the disease, according to a YouGov poll published on Friday.

Will the vaccine program make a difference?

Germany's Association of Cities, meanwhile, has tried to dampened expectations that the vaccine will be a silver bullet.

"It's a start, but the dangerous coronavirus scare is not over yet," the association's president Burkhard Jung told the Funke media group.

Helmut Fickenscher, an infectious disease physician in the northern city of Kiel, told the dpa news agency that the vaccination program "will not affect [Germany's] epidemic for the time being."

"This is because we simply have far too many people to vaccinate and will not have enough vaccine available for quite some time," he said.

COVID complications: Life after the virus

What is Germany's COVID-19 situation?

Like much of the rest of the world, Germany is in the midst of a second wave of the pandemic that began in October.

The Christmas holiday has not slowed the spread, with the Robert Koch Institute, the country's health authority, reporting 14,455 new cases over the past 24 hours.

Germany is 11 days into a strict lockdown that will last until at least January 10. The country has recorded 1.6 million cases and nearly 30,000 deaths since the pandemic began.

Which other European countries are starting vaccinations?

Germany is among several European Union countries that are beginning vaccinations on Sunday.

Italy and France were also set to distribute vaccine doses on Saturday in preparation for a rollout the following day. Austria, Bulgaria and Spain are also scheduled to begin vaccinations on Sunday. Belgium and Luxembourg are set to begin the immunizations on Monday.

The Netherlands and Switzerland, which is not an EU member, intend to start vaccinating in January.

COVID-19 has raised questions about how to keep young athletes motivated during lockdowns. Experts warn that the longer they are forced to stay inside, the harder it will be to get them back onto the playing field.