Germany: Court jails 10 Turkish communists | News and current affairs from Germany and around the world | DW | 28.07.2020

A Munich court handed out prison sentences to all members of a banned Turkish communist group who stood trial. They lent financial and other support while knowing the group was plotting a coup in Turkey. 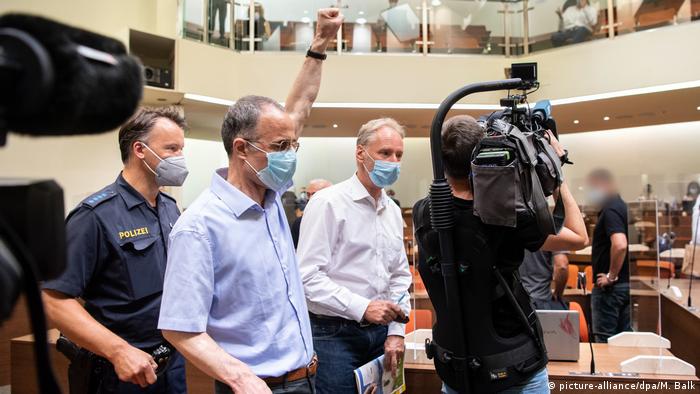 The Munich Higher Regional Court sentenced 10 people to prison on Tuesday for their part in supporting a communist group that is outlawed in Turkey.

The court found the nine men and one woman had collected money to support the Communist Party of Turkey/Marxist-Leninist (TKP/ML). They were also charged with organizing meetings and recruited members, reported regional public service broadcaster Bayerischer Rundfunk.

The group members acted in the knowledge that the party was planning a coup in Turkey and also carried out attacks with the intention of killing, the judge found.  A total of six people, including children, were said to have died during these attacks, the news agency AFP said.

Main defendant, Muslum E., was handed a six-and-a-half-year jail term, charged with being the ringleader of a foreign terrorist organization.

The other nine defendants received prison sentences of between two-years-and-nine-months and five years.

The sentencing wrapped up court proceedings that stretched over four years, with a total of 234 days in court.

Protesters had consistently turned-up to demonstrate against the trial. They see the members as freedom fighters, not terrorists. A final demonstration took place outside the courthouse on Tuesday. The defense and supporters of the group members argue that the German justice system was conducting a trial on behalf of Turkish President Recep Tayyip Erdogan.

The TKP/ML was founded in Turkey in the 1970s and actively fights against the government, sometimes with the use of violence. In Germany, the group is monitored by the Office for the Protection of the Constitution, but it is not banned.