Germany counts down to 2017 amid heightened security

People in Germany are gathering to mark the beginning of 2017. Celebrations in major cities were organized with security at the forefront, with authorities determined to avoid a repeat of last year's Cologne assaults. 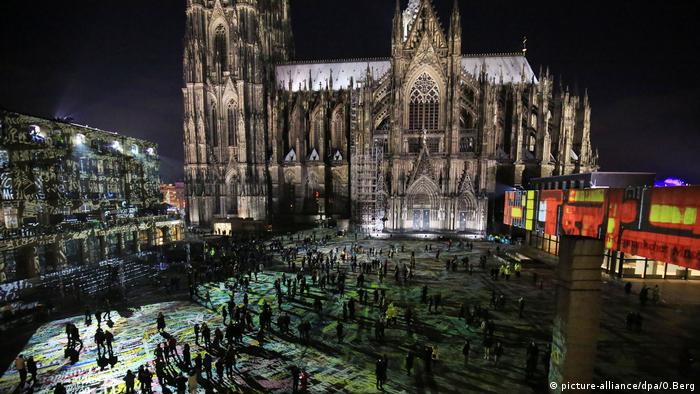 After a year marked by a series of terror attacks, and parliamentary elections looming in 2017, people in Germany are ringing in the New Year with a certain sense of caution.

Deutsche Welle's Dana Regev, reporting from Cologne which is in the spotlight this year following mass assaults and sexual crimes against women last New Year's Eve, wrote on Twitter early in the evening that hundreds of people had already started gathering to watch the light installation outside the city's famous cathedral. "That's my city," one reveler said, adding "and I love it."

In Berlin, where days ago 12 people were killed and dozens wounded in a truck attack on a Christmas market, security forces set up barricades at landmarks where crowds were expected to gather, such as Pariser Platz in front of the Brandenburg Gate.

New Year's Eve around the world: Fireworks and concrete barricades

Tightened security played a palpable role in celebrations as the world welcomed the New Year. Terror attacks and a string of sexual assaults during last year's festivities have particularly left their mark on Europe. (31.12.2016)

Have a second? You do on New Year's Eve

The Earth does what it wants: Its real rotation just doesn't take into account what our calendar says. Indeed, the planet is revolving more and more slowly. That's why we have to give in to reality, and add one second. (30.12.2016)

Police and a court in Cologne have denied requests from two far-right German parties to hold rallies on New Year's Eve. Officials cited security concerns in barring the rallies by the NPD and AfD. (30.12.2016)

In her annual New Year's address Chancellor Angela Merkel warned that the country still faced the threat of terror attacks in the new year but vowed to take whatever steps were necessary to ensure the country's security. But she defended her immigration policy (Germany has taken in about 1 million refugees over the past two years), pointing to Aleppo, Syria and citing the need to help those fleeing the horrors of war.

Alice Weidel, a member of the Alternative for Germany (AfD), a right-wing populist party, slammed the chancellor's comments.

"The address gives the impression of being helpless and disoriented," Weidel told the German news agency dpa on Saturday. Terrorism is not something that can be defeated with humanity, but with a "tough crackdown and border security," she said.

It is with that political backdrop that Germans, and visitors to Germany, are marking the new year.

"I don't like the way politics is going," Daniel Brandt told the Associated Press in Berlin. "Fears are being fanned and people are so angry with each other."

But Hamed Noori was more upbeat. Walking by the German parliament building, Noori said 2016 had been a good year. "I came to Germany from Afghanistan," he said. "Life is better here."

Nicole Durand-Nusser, originally from France but living in Berlin for almost 50 years, said 2016 had been a difficult year: "Brexit, Trump, Erdogan - it's all getting worse.

Back in Cologne, DW's Dana Regev noted the drastically increased security around the cathedral and central train station, including checkpoints set up to ensure fireworks were not brought in to areas where they had been banned.