Germany: CDU′s Armin Laschet has party support for chancellor candidacy | Germany | News and in-depth reporting from Berlin and beyond | DW | 12.04.2021

The leaders of Germany's biggest conservative party support Armin Laschet to succeed Angela Merkel as chancellor candidate at the next election. But the CSU's Markus Söder has not yet given up. 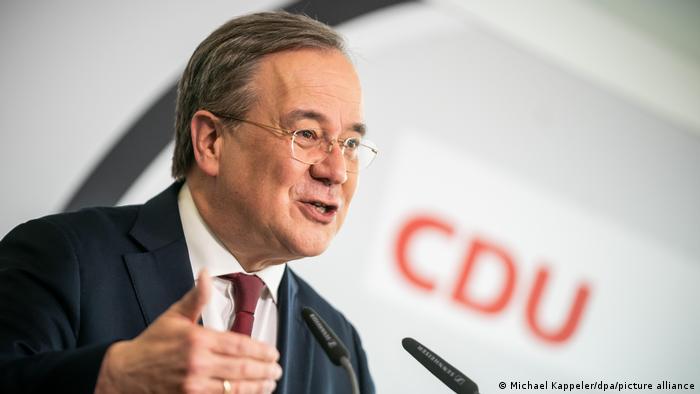 Armin Laschet is favored as top pick for candidate

The regional parties of Germany's Christian Democratic Union (CDU) stood behind their national leader, Armin Laschet, as candidate for chancellor in elections set for September, the party decided on Monday following a meeting in Berlin.

At a press conference, CDU General Secretary Paul Ziemiak confirmed what many expected: That Laschet enjoyed "broad support" among the regional CDU parties.

The news gives Laschet an important boost, but the final decision on the candidacy has not yet been made, as Laschet's rival, Markus Söder, Bavarian state premier and leader of the CDU's sister party, the Christian Social Union (CSU), refused to give up his own potential claim to the candidacy, which he had declared on Sunday.

After its own meeting on Monday afternoon, the CSU declared unanimously that they would back their leader for the candidacy. According to the Reuters agency, Söder said that the support of the CDU regional parties was not an adequate mandate: One had to "go wider into the party" to determine who should be be the CDU/CSU candidate.

That has set the scene for a week of uncertainty for the CDU/CSU alliance: Söder currently enjoys more popularity than Laschet among the German population at large — and among CDU voters — but Laschet appears to have the overwhelming backing of the CDU leadership. So far, only the Berlin branch of the CDU has publicly supported Söder's candidacy.

On Monday afternoon, Laschet told reporters that he would speak to Söder during the day, noting pointedly that 15 CDU state parties were unified in wanting a quick decision.

A few hours later, according to the dpa news agency, Söder told a CSU leadership meeting that he was against a hasty decision, and called for talks with the CDU at the end of the week.

In January, the CDU chose Laschet as its new party chair. Generally, the party leader stands as the chancellor candidate for the party, but 60-year-old Laschet, the premier of Germany's most populous state North Rhine-Westphalia, has seen his popularity fall following the CDU's poor regional election results in Rhineland-Palatinate and Baden-Württemberg and general dissatisfaction with the government's response to the COVID pandemic.

On Sunday, Söder told a CDU meeting: "If the CDU were willing to support me, I would be ready. If the CDU does not want it, then we will carry on working together without a grudge."

But Monday's developments show that Söder has a bigger hill to climb than his rival: The CDU is the dominating force in the conservative alliance, and so it takes an extra psychological leap for the CDU to cede the role of chancellor candidate to the CSU.

In fact, only two German general elections have featured a CSU chancellor candidate before, and in both cases, he failed to win the chancellery: In 1980,  Franz Josef Strauss led the alliance to 44.5% of the vote, but could not unseat Helmut Schmidt's coalition government.

Then in 2002, Edmund Stoiber finished neck-and-neck with Chancellor Gerhard Schröder (both taking 38.5% of the vote) but again failed to find a coalition that could topple the SPD leader's government.

What is Germany's CDU?

The current German government, under Merkel, is a grand centrist coalition between the CDU and the center-left Social Democrats (SPD).

Merkel — who has been Germany's chancellor since 2005 — will not stand again in September's general election, and the resulting power vacuum has left the center-right CDU facing a decline in popularity.

The conservative alliance also took a hit after several CDU/CSU Bundestag members were forced to step down following allegations of corruption.

Who could succeed Angela Merkel as German chancellor?

Angela Merkel's conservative CDU/CSU bloc is yet to decide on its top candidate for the 2021 general election. The SPD has already done so. And the Greens - currently second in the polls - have two potential candidates.