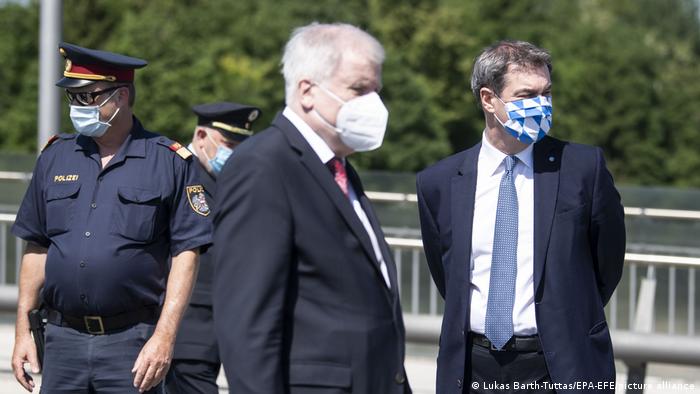 Both Seehofer, left, and Söder, right, are in favor of tough and uniform rules across Germany

Interior Minister Horst Seehofer said on Sunday that coronavirus rules should be made uniform across Germany.

Seehofer, a former state premier of Bavaria, said the move was necessary — and would be popular — after a patchwork of differing approaches emerged among the country's 16 states.

What are the latest comments?

The former leader of the Christian Social Union (CSU) — the Bavarian sister party of Merkel's Christian Democrats (CDU) — said there was "a great longing among the population for uniform rules."

"My proposal is, therefore, to establish the uniform rules by a federal law," Seehofer told the Welt am Sonntag newspaper.

Seehofer's call was echoed by his successor as Bavarian premier, Markus Söder, who is seen as a possible successor to Merkel as chancellor.

"Uniform rules are needed rather than a patchwork of impossible rules in different states," Söder, who now leads the CSU, told the newspaper Bild am Sonntag.

Some state leaders, including North Rhine-Westphalia premier Armin Laschet, another would-be Merkel successor for the top job, are more eager to open up from the lockdown.

Merkel criticized some states last week for not implementing agreed resolutions against the pandemic once case rates rose above 100 in 100,000.

If that did not happen "in the very foreseeable future," Merkel said, she would have to consider ways to implement regulations on a national basis.

Throughout the pandemic, Merkel has been in favor of strict measures to contain the virus. She has even publicly criticized Laschet — who is the leader of the CDU — for North Rhine-Westphalia's loose policing of COVID restrictions.

Meanwhile, German President Frank-Walter Steinmeier has said the country is going through a "crisis of trust," and he urged people to "pull together" amid widespread dissatisfaction at the government's handling of the pandemic.

In an Easter address broadcast on Saturday, Steinmeier conceded that mistakes had been made when it came to issues such as testing and vaccinations.

Over 10,000 people marched through Stuttgart to protest lockdown rules at an unexpectedly large rally by the so-called "Querdenker" (lateral thinkers) movement in Germany.