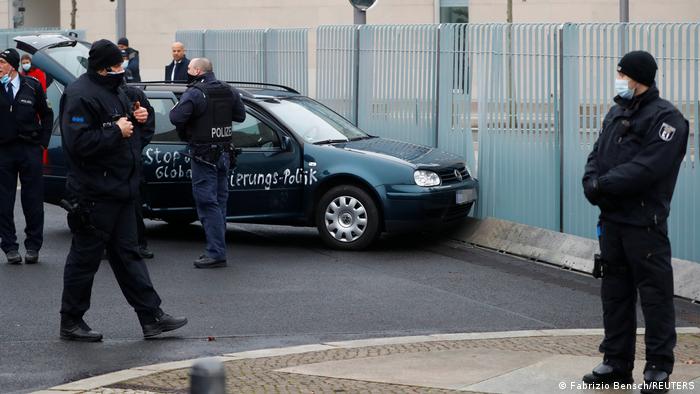 Police in Berlin arrested an unnamed man who drove his car into the gates of the office of German Chancellor Angela Merkel on Wednesday.

Photos showed a car with a message scrawled on one of its sides reading: "You damned children and old people murderers." The white paint on the other side said: "Stop Globalization Politics."

A government spokesperson told DW that a vehicle drove into the entry gate of the Chancellor's office and "caused minor property damage."

The Chancellor and other members of the government and Chancellor's office were "at no point in any danger."

A tweet from the public broadcaster Deutschlandfunk showed the vehicle stopped by the gate of the building and a large number of emergency vehicles in the normally restricted area.

The Berlin police tweeted that "our colleagues are currently on the scene at the office of the Chancellor along with federal police. A car is stood at the gate of the building — we're in the process of clarifying whether the driver steered into it. He has been taken into police custody. More info to follow."

A later tweet confirmed that the 54-year-old male driver had been arrested.

A spokeswoman for the Berlin police told Reuters that they do not suspect an extremist attack, saying: "We are not working on the basis of this assumption at the moment."

The Volkswagen Sedan, which sustained minor damage, had license plates from the North Rhine-Westphalia area of Lippe. The plates were identical to those belonging to the car involved in a similar incident in 2014 when a vehicle drove into the Chancellor's office with a message written on the side.

There were no immediate reports of casualties, although rescue crews confirmed to AP that the man who had been driving the car was being treated in an ambulance at the scene.

The event took place during a cabinet meeting in the run-up to a key video conference between Chancellor Merkel and German state premiers regarding extending lockdown measures across the country.

Berlin has been a hotspot for demonstrations against coronavirus restrictions which have been attended by neo-Nazis and people pushing conspiracy theories.

It remains unclear whether there is any link between the protests and the incident at the Chancellor's office.