Germany Calls on China to Open Up on Tibet

German Foreign Minister Frank-Walter Steinmeier has called on China to be open about the situation in Tibet after the worst rioting in the Himalayan region in nearly 20 years.

The outside world doesn't know exactly what is transpiring in Tibet

The foreign minister, who made his remarks in an newspaper interview, said China and Tibet should find common ground to avoid more bloodshed.

"The (German) government is telling the Chinese very clearly: make sure that there is transparency! We want to know exactly what is happening in Tibet," Steinmeier told the mass circulation Bild newspaper in an interview published Saturday.

"China is hurting itself if it stops foreign observers from getting an idea of the situation."

Steinmeier said window-dressing for television was no longer doing it for the outside world "when chaos is reigning in the backyard."

"He who organizes Olympic Games today must let thousands of journalists into the country," he added. "Nothing can be hidden."

China has sealed off Tibet from foreign reporters and tourists, while releasing images and television footage of violent Tibetans.

Steinmeier said he would speak to his Chinese counterpart over the weekend and stressed that only dialogue would allow to find a solution to the unrest. 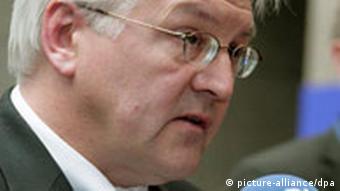 Relations between Germany and China cooled last September after Chancellor Angela Merkel met with the Dalai Lama, Tibet's spiritual leader, much to the dismay of Beijing. The Dalai Lama has said he is against the current violence and only wants more autonomy for his homeland.

Faced with international concern over its handling of the crisis, Chinese state media have acknowledged that police opened fire on protesters.

After days of official statements that no lethal force had been used to quash the unrest, which has left an unknown number dead since protests broke out last week.

China has barred foreign reporters from Lhasa and parts of neighboring provinces that have seen unrest.

The unrest has come at a sensitive time for China's rulers, with the Beijing Olympics less than five months away.

Expert Believes West Can Do Little to Sway China over Tibet

As the UN's top human rights body faces calls to break its silence over China's crackdown in Tibet, DW-World spoke to a German political expert about the protests and what action the international community can take. (21.03.2008)

China has ordered the last foreign journalists remaining in Tibet to leave the province. It comes amidst reports of China beefing up its security presence in and around the area. (20.03.2008)

How do you think Germany should respond to the violence in Tibet? Please include your name and country in your reply.